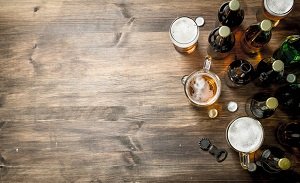 Many years ago, nonalcoholic beers were just displayed on some counters, and not many people enjoyed consuming them. But now, many non -alcoholic beer brands offer it, and it is gaining a lot of attention.

Multiple big-box brands and craft breweries are getting into the game and pumping out nonalcoholic options like Lagers, IPAs, and stouts.

Is there any beer with 0 alcohol? Yes, there are many brands of beer that offer 0 alcohol to their drinks. Partake Brewing, Run Wild IPA from Athletic Brewing Company, Heineken, Coors Light, and Brooklyn Brewery.

This article will focus on different brands that offer zero alcohol to their beers. You will also find some helpful information on nonalcoholic beer and its benefits.

Nonalcoholic beer is comparatively different compared to low-alcohol beer or any unique diet subset. To explain it further, alcoholic and nonalcoholic beers start their fermentation process in the same manner.

Only when brewers heat the beer in the production and the alcohol is completely burned off. Alcohol can be eliminated from the beer by filtering it before you finish the brewing process.

There is a solid range in the sugar content in many beers, which you can easily taste since there is no alcohol. It means that there won’t be any medium to balance the sweetness, but most are usually within reasonable diet limits.

Here are some of the best zero alcohol beers that you should check out if you are planning to try them out or shift to nonalcoholic ones:

The best nonalcoholic beer on this list is the Partake’s IPA, which can easily stand up to other full-bodied beers. It has a blend of hoppy and malt-forward flavor profiles which a lot of nonalcoholic beer drinkers love.

You can expect to have a 0.3% ABV in each can, and there is still that lovely bitterness to this nonalcoholic option.

Many consumers note that this IPA could easily pass a blind taste test, making it like authentic beers. Despite noting its even balance, Partake really nailed it in the malty undertone that many true IPA lovers can enjoy.

Athletic Brewing Co. has one of the expansive lines when it comes to nonalcoholic beers. For this reason, they were able to make the category more popular with different consumers. This Run Wild Non-Alcoholic IPA is a great place to start if you have never tried it before.

This brand takes a craft approach in making their IPA that can execute a heavy malt undertone. Another excellent thing about this brand is that you can expect to have a total of 70 calories for every can.

Heineken is a famous beer brand, and you know that it is beloved minus all of that alcohol. If you are looking for some alcoholic refreshment that you can replace, this is best.

Heineken’s 0.0 Lager only contains 21 calories per bottle, 4 grams of carbs, 1.3 grams of sugar. While the flavors are not considered vital because of their light makeup, it is still an excellent option for people trying to limit their calories.

This brand might come as a surprise for many consumers out there, but Coors offers a nonalcoholic beer.

It does not have the same flavor profile as its Light cousin because the taste is different. This one has a sweet mouthfeel for a nonalcoholic beer which will appeal to some beer enthusiasts.

This feels closer to something like you expect to drink in an Oktoberfest as the main attraction. The aroma and gold hue all come together thanks to a wheat-forward recipe, and you can expect to have some citrus notes in it as well.

Just like many German-based beers, Clausthaler Original Non-Alcoholic Beer variation is made by adhering to what is known as the German “purity” law.

It means that brewers only use barley, hops, and some water in different amounts to create their beer. Clausthaler’s crisp has a taste that has been meeting standards for many years. This brand has also launched a cranberry-cinnamon spinoff which is called Santa Clausthaler.

This Brooklyn Brewery provides a subtle sweetness with a non-alcohol blend with a perfect balance of bitter finish. This nonalcoholic beer contains interesting notes and layers, and you will get hoppiness and complexity.

This is way different compared to other booze-free beers, where it tastes like a participation trophy.

If you are looking for some perfect refreshments for summer days, Gose brew needs to be on your bucket. It swings past the balanced into the sour territory, but it is peppered with salty flavors to bring back a unique flavor.

This is perfectly paired with some infused raspberries that can add some noticeable tart notes. If you have a barbecue party outside, this is a perfect addition to your drinks area.

This is probably the strongest beer on this list, and you can expect to have plenty of malty notes. This brand uses two different kinds of malts before brewing is complete alongside some oatmeal. You will be surprised that it has 45 calories, given the fact that it has robust flavors.

Gosling’s are known to depart from the usual ale, but many consumers might not know ginger beer is also fermented. It is the same process with other beers on this list, but it does not include hops or gluten.

The only difference is that it includes plenty of ginger flavors to please many beer lovers.

BrewDog Nanny State is technically not free of alcohol as it clocks in at 0.5% ABV. If you drink at least 13 cans of it, you will be able to feel a mild tipsy feeling.

This brand offers various packs with loads of Centennial, Amarillo, Columbus, Cascade, and Simcoe hops. If you are a fan of IPA, then you will most likely enjoy this brew.

If you are looking for some alcohol-free brewery in Germany, then you should go to Clausthaler. This pick is dry-hopped with some cascade hops that give the beer a citrus flavor profile.

It is very rich in color and finishes with some caramel taste. If you are not a fan of hops, this brand makes different varieties like the original and lemon.

This nonalcoholic drink is from a Danish brewery with notes of peach, apricot, and some grapefruit. It can be a refreshing drink after your exercise as beer has phenols to help with the inflammation.

In addition to that, the sugar and electrolytes in some varieties aid in post-workout recovery.

Bitburger Drive is named after what you will do if you drink it as it has no trace of alcohol. It is a German pilsner with a clean and light flavor, whether sitting on a poolside or family barbecue. It can serve as a refreshing drink that is easy and filling in every can or bottle.

It is among the most popular nonalcoholic cocktail mixers, and it is also an excellent standalone drink. Ginger beer is also fermented like any regular beer, but it does not have hops or gluten.

The potent ginger provides you more with flavor, and it can help settle sour stomachs and reduce inflammation.

Suppose you wish to take a break from alcohol. You can still drink beer as there are nonalcoholic beer options. This exists for this reason, and believe it or not; you can get many benefits from drinking it.

A wide array of supporting evidence strengthens this claim if you are consuming moderate alcohol, from the antioxidants coming from the wine to the mood-boosting effects of a delicious brew.

With that being said, there are times that you want to avoid alcohol, but that doesn’t mean you have to stick to sugary drinks.

If you play some sports, there are times that you want an accompaniment of your favorite cold glass of beer. This may be whether it is alcoholic or not, but if you prefer more physical sports, you might want to pass it out.

It is best to wait until you finish playing to indulge because the sodium in nonalcoholic beers helps you recover. The fluids and carbohydrates that many beers contain also help your body to recuperate after exercise.

Alcoholic beer can be beneficial after exercise, but one disadvantage is that it has a diuretic effect. This means that it can increase the urine output and it can leave your body dehydrated.

Some studies show that the lower the alcohol content is, the better the nonalcoholic drink rehydrates your body.

Nonalcoholic beer is believed to help with your cardiovascular health because of the polyphenols found in beer. Polyphenol xanthohumol is a compound derived from hops, and in most specific terms, it can help reduce blood pressure.

It can also help in the inflammation and homocysteine levels. Further studies show that beer consumption can increase endothelial progenitor cells. These cells can repair and maintain the endothelial walls of your blood vessels.

Many moms out there should avoid drinking alcohol, especially if they are breastfeeding. But this doesn’t mean that they cannot enjoy the best nonalcoholic beer from a night out or while relaxing at home.

Nonalcoholic beer can help stimulate the secretion of prolactin, which is a hormone that enhances breast milk production. This is because the barley and many beers contain polysaccharides that can boost milk flow to mothers.

Reduces The Risk Of Osteoporosis

Silicon, a nonalcoholic component of beer, can increase bone mineral density and reduce the risk of osteoporosis. All you should do is search for some nonalcoholic beer with high levels of malted barley and hops to get this benefit.

Hops are known to be the key ingredient in many nonalcoholic and alcoholic beers.

They are used for their preservative characteristics and distinct flavor. But the compounds xanthohumol and Myrcenol in hops can have a sedative effect and can improve your sleep patterns.

The same thing with hops in a beer that helps promote sleep, it is also believed that consuming alcohol-free beer reduces anxiety. Some studies affect anxiety levels among people who are under stress.

To sum it up, going alcohol-free does not mean you will give up drinking beer, as there is still a spectrum of nonalcoholic options to choose from.

The great thing about drinking nonalcoholic drinks that are listed above is that you still get satisfaction. In addition to that, known health benefits make it the ideal drink compared to sugary soft drinks.

While most beers have their positive benefits, you can enjoy these without a hangover the next day with zero alcohol.