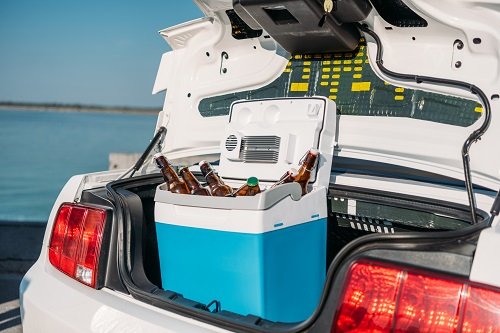 Finding the best gift for a beer lover is a little complicated. Especially if you’re not like them, your effort to find the best will make them the happiest. There are plenty of clever gifts that you can find, and it’ll make it easier for you to pick for them.

What do you get a beer lover?  Not only a beer itself that you can give to a beer lover. Like a cooler, gift card with glasses, a can insulator, and a Beer Equipment kit.

As you read on, you’ll be able to know things that you can give to a beer lover. It will also tackle reasons for being a beer lover, also the correct term used for a beer lover. And some advantages and disadvantages of drinking beer.

Gifts You Can Give To A Beer Lover

As said, finding the best gift for a beer lover won’t be easy. But don’t worry because we listed some of the gifts that suit your beer lover loved ones.

It is one of the best coolers in the market, according to most beer lovers. Why? Because it helps your drink keep cold for hours.

Not only drinks that you can keep in this, but a part of food too. So, if your beer lover friends decide to go on trekking, this one’s a perfect storage partner.

The brewmaster and founder of Interboro Spirits and Ales can testify to it. He said that this cooler is perfect for those who love beers but needs to keep their brews ice cold.

It has a wide-mouth opening with a magnet that helps it close. It’s like a sling bag because it has top handles and a shoulder strap.

A leak-proof liner and a shell that’s resistant to punctures, mildew, and UV rays are what make it perfect. It can hold up to 20 beer cans or 28 pounds of ice.

2. A Gift Card And A Glasses

Another top gift for beer lovers is a gift card and glasses. This is one unique gift you can to your beer-loving friends. Or you can order a gift card to your friend’s favorite beer shop and have it delivered via mail. It may not look that appealing, but it’s helpful though especially during this time.

To complete the package, you can also add a pair of stemmed beer glasses. Choose the ones that are classic, beautiful, and inexpensive compared to quality.

There is some spot on the beaches that don’t allow the bringing of a beer bottle. That’s why this can insulator is a perfect gift for your beer lover friend. It will also help keep your friend’s beer at an appropriate temperature, aside from the fact that it’s durable and lightweight.

If your friend is a homebrewer, then this kit is perfect for him. This kit has all the equipment needed to make beer at home. Included are the automatic siphon, beer bottle brush, cleanser, a handbook, and an adhesive thermometer.

For people who are severe home brewer or beer lovers, this one’s perfect for them. Many would recommend this fridge for a keg. Though a bit pricey, this is still a great way to spruce up their home-bar setup. Especially to those who are beer collectors.

You can buy a 24″ inch model kegerator that can accommodate a full-size keg. Or a quarter-size barrel and three narrowed brew kegs. Not only that, because it can turn into a regular refrigerator, add the two shelves.

This one is from Belgium, which has a specific style. A Lambic is unique because it’s fermented with a native yeast inside. Or also known as the bottle-considered beer.

You read it right. Beer is not for drinking. This basket has a dry bar of soap that comes with moisturizing properties. It will also give a unique scent in the shower. If you order this, it has a scented beer soap of your choice.

A healing salve and lip butter are in this basket. It’s a perfect gift not only for men but for women too who love beer.

Another unique gift you can give to a beer lover is a beer-flavored box with cheese. What makes it unique is that artisanal cheese uses beer as the main ingredient. This box contains four pieces of cheese which have ale, stout, and the likes.

From cheese, now let’s go to bread, proof that beer has taken the culinary by storm. It may sound impossible, but it’s possible, a beer bread that contains the top three flavors.

Jalapeno beer bread, Vidalia beer bread, and the delicious beer bread. What unique snacks that can you eat, right?

10. The National Geographic Atlas Of Beer

It is one of those must-haves for beer lovers for sure. It’s a treasure wherein it contains the history and the geographic origins of beer on this planet. The recipient will love this gift because of its vintage cover, which makes it cooler.

Beer lovers love their drink when it’s chilled. You only need to put these in the freezer for 45 minutes. Then pop this to any bottle- room temperature and Voila! Your drink is chilled within seconds only.

It may sound unbelievable, but many would call this a science.

A beer jelly pack is one perfect unique gift you can give to a beer lover friend. This jelly pack comes in three different flavors such as Indian pale ale, apricot ale, and green mountain ale. Looking for a unique spread, try these, and you won’t regret them.

Encouraged your beer lover friend to do experiments with some unique sauces. This handcrafted beer BBQ sauce comes with fun vintage labels too. Flavors are teriyaki, brown sugar, chipotle, and more, which complement the meats.

Some women love beer too, and to make them happy. You can gift them this beer bath inspired. Some of the ingredients of it are beer and cornstarch. For sure, your beer lover friend would love to soak in a bath with this.

If you have a sweet-tooth friend, this one’s a perfect gift for them. Gone with those old flower bouquets because they will love this. It contains six freshly baked cookies, then frosted it to appear like the Coor light.

16. Around The World Bucket

Let your friend have a taste of the world’s beer with this bucket. They will surely love this, which contains flavors of Ireland, Canada, Mexico, and more. Also, this basket comes with some tasty snacks like salami and summer sausages.

There are plenty of words or phrases that are being used to describe a beer lover. But a Cerevisaphile is one of the famous terms used.

The root word Cerevisia is a Latin word that means beer, and the suffix “phile” means lover. The pronunciation of it is, Sara-Viz-A-File.

Have the same structure as the Cerevisaphile, in which the root word is Greek and ends with phile. The root word comes from zûthos, which means Barley. And Barley refers to beer. The beer community uses it, which is described as a study of beer and the brewing process.

There are a lot of brewing organizations that use this word in their title. A sample of it is the Zythology League of Texas and the Zythological Society of North America.

This term is one of the most prominent and used terms. Some people prefer to use this because it’s easy to pronounce and understand.

This term may go beyond the meaning of a beer lover. A true liberationist is the one who knows the ingredients used in a particular beer. Also, he knew where the brewery came from and is familiar with the brewing process. This person knows about liquor too and cocktail drinks.

It is someone who loves pairing and serving beers with foods. They are also experienced in selecting and acquiring beers. You may not hear this before, but it’s more used in the hospitality industry. Cicerone is something you can be certified in, in three levels.

Most people expect and know that this is the perfect term for beer lovers. A beer snob is a person who is overly critical and judgmental not only to beers but to people who drink beers.

Meaning they see themselves better compared to other drinkers. Most use this term to describe a beer craft lover, but it’s apparent that it’s not appropriate.

Reasons Why Many Love Beer

There’s no doubt and surprise that many love to drink beer. But some people don’t want to drink beer. Here are some top reasons why these people love drinking beer:

Some would admit that when they first taste a beer, they didn’t enjoy it. The main reason for it is our taste buds- which have five different groups. There is sweet, bitter, salty, sour, and savory or umami. The cells in your taste buds respond to these different types of flavors.

They send a message back to our brain stem, telling us what you’re consuming. A bitter flavor means a red flag to the brain or associates it as poison.

But, if a beer tastes bitter, why it’s still one of the most famous drinks for many? It’s because of the unique taste that satisfies the drinkers.

We couldn’t deny the fact that eating food is better with a cup of beer. Also, some may say that the beer changes the way you experience the flavor.

Both salty and sweet foods can help to distract the bitterness of the beer. That’s why salted peanuts are one ordinary bar snack when drinking beer.

We know that drinking alcohol has effects on the way you feel. But beer also plays your emotions. In one study, they say that beer, when consumed it produces dopamine. It is a chemical associated with pleasures.

Meaning, beer can make you feel good, which makes you crave for more.

We know that it’s impossible to believe, but it’s true. In one of the studies, the group who consumed an average beer performed better in creative tasks.

That’s why some people prefer to drink beer before the brainstorming starts. But it’s not advisable to drink beer that needs your concentration and focus.

And the study shows too that when you drink more than two bottles, creativity disappears.

They say that a beer is a drink to every man and every woman too. That it emphasizes the importance of unification that brings the people together. It is why some prefer to have a pack of beers to share with their friends or buddies.

Drinking beer isn’t bad as others may think and know. It also has benefits. Here are some of those:

Some shreds of evidence drinking beer has health benefits. It’s not for everyone. These are the people who are dealing with some specific conditions. Don’t consume beer if:

In general, giving a gift to a beer lover isn’t complicated as long as you know what to give. This article gave you new bright ideas from beer and taught us to be responsible drinkers though it has health benefits.