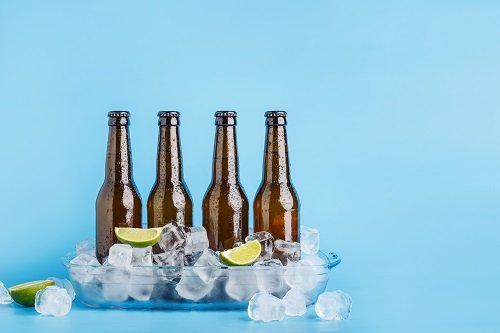 What Is The Fastest Way To Get Beer Cold?

The best way to survive during the heat of summertime is actually having a few refreshing cold beers at your disposal.

But there are times that you forgot to put some bottles in the fridge and ended up having zero cold beers to drink.

Knowing how to chill your beer properly in a short amount of time will cause you no panic.

Want to chill your beer faster the easiest way? You might be surprised that you can find some of the items you need in your pantry. Check them out below.

How To Make Your Beers Cold

Every beer drinker has their own dilemma when they come home after a long day, and they realize that the fridge is empty and no cold beer is on sight.

Drinking beer that is at room temperature is not really the best kind of beer. You generally leave with two options: drink the beer warm or drink zero beer at all.

The good thing is that there are some ways that you can chill your beer faster. There are many beer hacks out there that will help you to save time and get your beer ice-cold in just a matter of minutes.

Here are some beer hacks that you can try depending on the availability of the items mentioned below:

One way to chill your beer in less than 15 minutes is by submerging your beer bottle or even can in a bucket filled with ice water and some salt.

The salt actually helps in lowering the freezing temperatures of the mixture of ice and water. It will cause the ice to melt, which scientifically will lower the water’s temperature and chills your beer faster.

Salt is not just for flavor, so once you put it in the water, it will get your beers down to the mid 30 degrees F.

Another way to chill your beer bottle is by wrapping your beer in a damp cloth or even a paper towel then place it in the freezer.

As the water present in your damp cloth or paper towel, it draws heat away from the beer bottle itself. Hence, it will cool it faster.

You will get the expected results within 15 minutes, and you’re ready to enjoy a cold beer.

If you have the means, you can attach a SpinChill, a chilling device that can be attached on top of your beer bottle or can.

Then you can submerge your beer in a bucket full of ice water and salt. After that, you can easily activate the device, and it will rotate the beer in the ice water without creating any carbonation.

According to the manufacturer, spinning will add convection to increase the heat transfer between hot liquid and ice.

If you have difficulty handling different tools, this kind of skill can be handy when chilling your beer.

All you need to do is drill a hole in the top of your thermos cap and then securely fasten a long screw into the hole using two bolts.

After that, you can attach the screw to a power drill then submerge your beer can in a pitcher full of ice water and salt.

Put the thermos cap over the beer, and then you can activate the drill. The beer will rotate quickly, and its spinning motion will increase the heat transfer rate, resulting to faster cooling.

Chill Your Beer With Compressed Air

If you think about compressed air, you won’t instantly associate it with beer bottles. But this kind of beer hack actually works.

Spray your beer with it at close range for about 1 minute, and you’ll see frost form on the exterior part of the can.

This hack is tricky as you need to hold a bottle of compressed air upside down and then spray the side of a beer for a few seconds until frost forms. Holding it this way makes the air that comes out extra cold.

Dry ice is another way to chill your beer, and if you can get your hands on this, not literally, that will be great.

It is worth mentioning that you should not be touching it directly, and don’t let your beer bottles or touch the dry ice.

Packets of dry ice and some distance from the could source will help you chill your beer to a point where you are comfortable with it.

Copper is one way of chilling your beer, but chances are you won’t get your hands on it, but if you can, it is a great tool.

This means that you should skip the aluminum foil and use copper foil instead.

The only problem is, it can be hard to get, and if you can get one, introduce it carefully to your freezer.

This is probably not the most cost-efficient method when it comes to chilling your beer bottle, but blasting your beer using a fire extinguisher will get it good and cold.

Your chilled beer will be ready in a few seconds. When it comes to the extinguisher, you need to have a carbon dioxide extinguisher, not a monoammonium phosphate version.

The process works by starving fire oxygen but, at the same time, overabundance of CO2.

As a result of this action, it will make things very chilly so that you can place the beer in a bucket, so it stays in one place, then triggers the fire extinguisher quickly, repeating 1 to 2 seconds blasts at the beer.

Just make sure to recharge your fire extinguisher in case of an actual fire emergency, and then put your beers in the fridge more promptly in the future.

How Cold Should Beer Be Served?

It is important to know how cold beer should be when it comes to its serving.

A lot of people enjoy an ice-cold beer, especially during hot summer days. This is because there is nothing better than a refreshing glass of beer that you can feel fizzes down your throat.

But many argue that having an ice-cold beer will limit the exact taste of the beer itself.

Sometimes you want a refreshment, but if you aim to enjoy the taste of your beer truly, you should not drink it super cold.

If the flavor is what you are after, drink your beer at a temperature of 42 degrees F.

If you are a fan of drinking beer that is heavier, like Tripel or IPA, the temperature you should be looking out for should be higher.

A Tripel tastes best at 46 degrees F, and there are even beers that only flourish at a certain temperature of 57 degrees F. These actually include heavy and dark beers like a stout or a Quadrupel.

If you drink them directly from the fridge, you will be missing out on the essence of the beer.

Finding the right temperature is both a simple and a tricky question to ask.

This is because each beer is different from one another, so the correct drinking temperature should rely on the type of beer itself.

As a result, many brewers actually suggest serving temperature for their beer, depending on the type.

Checking the alcohol percentage is the simple fix to this problem. In most cases, the number can be used as a guideline.

Just make sure to round up rather than down like, for example, a beer with an alcohol percentage of 6.5%, so it serves at 44 to 45 degrees F rather than 42 to 43 degrees F.

The temperature is important because if the beer is served too cold, the flavors will be locked away.

Just remember to serve it at the exact temperature, and the flavors will reveal themselves. An exotically hopped IPA will have almost zero aromas if served at a temperature above freezing.

If you let it slowly warm, the aroma will start to build up and come out of its shell.

Overall, there are plenty of ways to chill your beer faster, depending on the items you can get your hands on.

You only need to be creative and know the science properly, and you will end up getting your cold beer.

It might be terrible mundane advice, but you should always make sure that you have a pack of beers in your fridge.

But in the end, you can follow the instruction below on solving that dilemma of not having any.