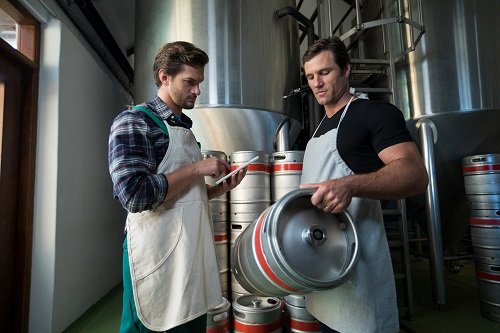 How Long Does Keg Beer Last?

You will want to get a beer keg if you are having a party! Beer kegs are great for just about every celebration with friends and plenty of beer you want to enjoy! However, storing keg beer is not like storing other beers.

Avoid spoiling the fun of drinking keg beer by knowing how to store it. This article will further explain how to store your keg beer to keep it safe for later use.

Keeping a keg of draft beer fresh has no one hard and quick rule. This is true for draft breweries because different beer types last longer than others.

A decent rule of thumb is that the shelf life for a pasteurized beer keg is about 90-120 days. Unpasteurized draft beer can last for about 45-60 days at the correct temperature.

If you are unsure whether the beer has been pasteurized, regard it as unpasteurized. Most domestic and imported drinks are pasteurized.

The countdown should always start on the day when the keg is filled at the brewery, not when you press it or buy it. Always observe the bottle to see if it has a “born on” date or expiry date.

Checking the born date is one of the first things you should do when you pick up a beer keg. Don’t drink the beer in your keg if it is past its expiry date.

The system you choose for dispensing your beer plays a significant role in how long your keg beer stays fresh.

Keep it at the correct temperature and pressure with the use of a kegerator or draft device. These devices will dispense draft beer using CO2 and will not affect the freshness of the beer.

You may follow the guidelines explained above to decide how long your tapped keg beer will last.

A different circumstance is using pumps such as a picnic pump and party pump, or a keg tap.

These inject oxygen into the keg, which accelerates the beer process that goes wrong. Note that picnic pumps use oxygen rather than carbon dioxide.

Based on the type of beer and how much oxygen has been injected into it, a tapped keg beer can last only around 12-24 hours.

If you do not consume the keg within this period, the oxygen will allow the beer to go flat and spoil faster.

Let’s look at the two most typical situations in which one can find oneself while tapping a keg. This will give you a clearer sense of how long your keg will last.

The manual pump, also called a bronco pump or party pump, is usually seen mounted on the top of a keg. You can see this more at house parties and backyard cookouts.

It operates by injecting air into the keg, pressurizing it so that your beer can be dispensed. If you’ve ever pumped a beer out of a keg, then this type of pump is common to you.

Many issues come with its use, such as over-pumping and foamy beer.

Unfortunately, this isn’t the only manual pump issue. It also lowers the beer’s shelf-life inside your keg.

This is because it uses oxygen. Adding oxygen to beer is a horrible idea, as it can allow the beer to become stale and the taste to change fast.

Generally, before the beer begins to taste stale, you’ll have at least 8 hours to finish the keg.

If you’re good, you can get a whole day out of it before it goes old. It all depends on the beer style and the amount of oxygen that has been injected into it.

A kegerator that uses CO2 to dispense the beer will keep the beverage fresher for much longer than the manual pump above. This is because the keg stays pressurized but avoids oxidation.

Your beer will stay fresh for months in this case, but the total time depends on the beer itself. If your beer is pasteurized, it will last at least 3 months if you store it at the right temperatures or even 6 months.

If it’s not pasteurized and stored at the recommended temperature, the beer won’t last as long. You are looking at maybe 2 months for non-pasteurized beer, give or take.

Always keep the temperature of unpasteurized ale and lager-style beers between 36-38°F to the point of dispensing. Most draft beer brewed in the United States is not pasteurized, so it must be kept cold.

Maintaining half a degree above 38°F can allow CO2 to break out of the beer. Once the beer breaks out, it will lead to foam and encourage sour/cloudy beer.

As temperatures increase above 50-55°F, bacteria’s growth will start to ruin the taste and fog the beer. You can compare the storage of keg beer to the storage of milk: “Always keep it cold.”

Placing One Glass of Water in the Refrigerator

Putting a bottle of water in the refrigerator with a thermometer is another tool for measuring the liquid temperature.

Wait 24 hours for the water to cool, and then you will have a correct liquid temperature reading. This will ensure that the temperature of 36-38°F is preserved to the dispensing point.

Pour beer into a bottle and verify the dispensing temperature. You can use a thermometer to read the temperature of the keg beer. It will balance the liquid temperature within the kegerator in the correct system.

If you are using a walk-in cooler for keg storage, try to restrict in-and-out traffic. Remember that opening and shutting the cooler can result in elevated storage temperatures.

If in-and-out traffic is unavoidable, do not worry, as there are things that you can do to save your keg beer. You can install flexible, transparent plastic air curtains or electric air curtains.

This will prevent the loss of cold air when the cooler is opened.

If you want to tap the keg with a real device using CO2 as the gas, you are not introducing a foreign gas. The gas in beer is CO2, which is a by-product of the fermentation process.

It should have CO2 in it when you order a keg. The keg, as such, would not go flat.

You inject O2, or oxygen, as you press the keg with a hand pump. What allows a keg to go flat is the combination of O2 and CO2. If you use a hand pump to tap it, then your keg is decent for a day or so.

Can an Old Beer Keg Make You Sick?

These bacteria can evolve and add a taste to the beer over time. These flavors are, for the most part, unacceptable. The special feature of beer is that it contains an inhibitor of natural bacteria: alcohol.

There are three ways to store draft beer. Practice these variables to avoid any problems with the keg beer.

Finding the perfect temperature for beer is the first key. Most beer is pasteurized inside a draft beer keg, which means it’s necessary to keep it cold.

Excess foam comes from high temperatures. Low temperatures create a flat taste because there is no flavor release.

Pressure is the next key for storing draft beer. For any glasses full of foam, a pressure that is too low will destroy those glasses.

First in, first-out (FIFO) is the idea that whatever was first put into storage, you will take out or use. If you’re aging, you want to pull out the oldest kegs first.

Enjoy your craft beer kegs as fresh as possible and save the newly stored ones for the next time.

4.   Friction Inside the Keg

Keg vigilance is the last trick to tasty tap beer. The less it rocks and rolls, the better the beer’s consistency will be.

You can keep all your draft beers now that you know how long a keg is good for and how to store them. Enjoy drinking keg beer, whether you are alone in your bed or with friends at a party.

Follow the methods mentioned above and get the most out of the keg beer experience.