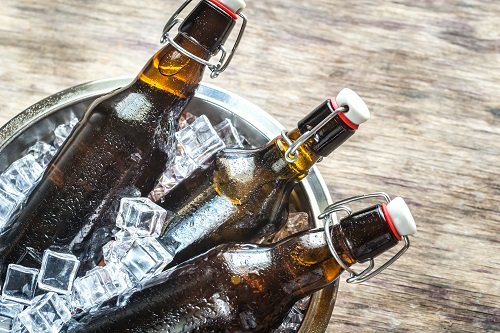 Beer is being sold in glass bottles. Some producers offer beer in plastic bottles, but nothing beats the old fashion way. If there isn’t a glass bottle, consumers prefer an aluminum can rather than plastic.

As you read on, you will learn more about the large beer bottle. This article will also tackle different types or names of beer bottles, determine the bottle’s age, and list famous beer bottles.

This beer bottle is also often called deuce or double deuce. While in European and Australian standards, the large bottle is 25.4 US fl oz.

Some brewers are using this bottle for limited-release and barrel-aged beers. It is usually dressed up by dipping it in wax. It is also used by craft and microbreweries for retails and distribution sales.

Some consumers called it a dinner size because it’s sometimes served with meals.

The term “bomber” came from the U.S. system of measurement. The advantage of the bomber is that it contains more beer compared to the 12-oz bottle.

But a consequence of it is that it’s a bit pricey compared to other bottles. Bomber often costs $3-$5 and even more.

Bomber bottles helped a company to be one of the state’s largest independent brewers. In 2008, a Portland-based mobile bottling service made sure that it would be the standard size.

The brewery boomed because of it, but things changed. Consumer realized that the bomber has a higher cost per ounce.

Other than the bomber beer bottles, there are other popular beer sizes. Here are some of those:

The word “nip” comes from the word “nippekin,” which means a small measure of spirits, usually a less or a half-pint. This beer bottle was popularized by Coronita, Miller High Life, and Rolling Rock.

The nip bottle is 7oz in size, and you can still find it today and often served with a bucket of ice.

It is a short glass that has the original name of steinie. These beer bottles have a shorter and flatter style than the standard ones, making it a transportable one because it eats a smaller space.

Advantages of these bottles are less storage phase, ease to handle, and less breakage. It is hardly used in Europe and is being used in Canada. In the 2000s, Canada reintroduced stubbies.

Also known as the standard longneck beer bottle or the Industry Standard Bottle (ISB). These bottles have a uniform in capacity, height, weight, and even diameter.

When you say Belgian, it’s not designed for Belgian beers. These types of beer containers are choices for lambic and gueuze-style drinks. The sizes of these bottles may vary. It has a capacity of 330 ml or 11.2 oz.

These types of bottles are famous in Mexico, with a capacity of 940 ml or 33.1 imp fl oz. The “caguama” refers to a Loggerhead sea turtle in Spain, and these terms are also in some parts of Central and Eastern Mexico. There are also larger caguama beer bottles.

The larger caguama beer bottles are famous with the name super caguama or caguamon. Meanwhile, the Ballen is also a Spanish word that means Whale and is most popular on the Northern Pacific Coast.

These types of beer bottles are popular in American Vernacular, a 40-ounce or forty. These bottles are in glass or plastic bottles with 40 U.S. fluid ounces or are equal to 1,200 milliliters.

Usually, malt liquor is in 40 fluid liquid-ounce bottles. 40 became popular among many youths in some inner cities.

It comes from another beer bottle which is the growlers. It is a 32- ounces glass bottle that they consider half the size of the growlers. Many also think that these bottles are perfect for takeaway draught beers.

It is the oldest and the most traditional way to if you want to take away a draught beer. Its name came from the sound of CO2 whenever it escaped from the lid cover. Growlers have 64 ounces and made from glass or stainless steel.

Listed below are some of the top beer containers that most consumers love. Aside from the size, it’s because of the container’s style too that matters.

Some people happen to be a collector of bottles. Bottles, according to most, are very valuable and collectible. If you know the age of it, you could sell them for more dollars. Some bottles cost from few dollars to $100,000 in antique markets.

These are some factors you should look to know the age of the bottle:

Experts say that the base of the bottle will help you determine how old the bottle is. In the 1800s, they invented a snap tool that holds glass without a rod.

With this tool, it eliminated the sharp pontil mark at the bottle’s base. So, if there’s a lack of a pontil mark, that’s the clue of a bottle’s age.

Bitter bottles, medicine, old liquor, and spirits have various base types. In 1855-1875, they used critical molds on bottles, making them look like a semi-circle on a bottle’s base.

Then in 1900, they popularized cup mold bases, and it’s smooth that leaves no marks. The standard type of bottle is the push-up base.

There are different forms of a bottle top, including screw tops, cork tops, crown tops, and the likes. The most common in the 18th century was the cork tops. It’s because of its impressive hold and seals on the bottle no matter what its position.

Meanwhile, in the early 1800s, screw tops surfaced. The Crown top has circulated in the market since the 1980s.

In general, the bomber is a famous name for a large beer bottle. Other than the bomber, there are other beer bottles too that are available in the market. And that these bottles have corresponding ounces and are collectible too.