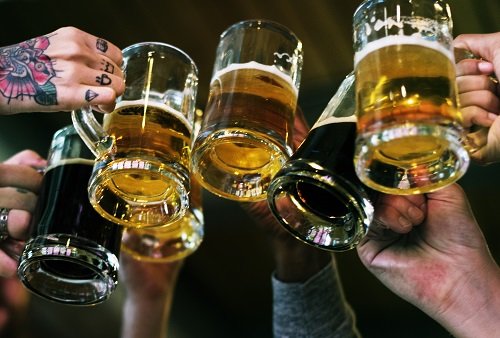 Is Beer an Alcohol?

Whether it is a night after a tiring day, a holiday, or any other occasion, people always have that one drink that brings comfort.

For most people, it is beer, as it has a rich, malty taste.

On the other hand, heavy drinkers don’t prefer beer, as they believe that it does not contain alcohol to serve their purpose of drinking.

Is beer an alcohol? Yes, it is a popular alcoholic beverage containing ethanol, an alcohol that has short- and long-term effects on the body. Most regular beer contains about 4% to 6% alcohol by volume (ABV). But this varies by brand.

In this article, learn how much alcohol there is in most beer and what makes beer acquire its alcohol content.

For those who don’t prefer alcoholic drinks, I will also discuss the best substitute available for you.

Beer is a popular alcoholic drink around the world. It is made by brewing cereal grains such as malted barley or grains like rice, wheat, and maize.

The brewing process involves fermentation of the starch sugars in the wort, producing carbonation and ethanol in the final product.

Today, modern beer is brewed with hops that increase the flavor and bitterness. It also acts as a natural stabilizing agent and preservative.

Other flavoring agents, like herbs, gruit, or fruits, are used instead of hops to add variation to beers.

The natural carbonation effect is usually skipped during the processing of commercial brewers and replaced by forced carbonation.

As mentioned earlier, beer has a small amount of alcohol, unlike other alcoholic drinks.

In fact, most beer contains only 4% to 6% alcohol by volume (ABV). For those people who don’t want to get drunk, beer is something they can enjoy.

However, drinking a couple of bottles in a short period will definitely make you drunk.

Aside from beer in bottles, you can purchase beer in cans or kegs.

Beer is part of most nations’ cultures and is associated with social celebrations like beer festivals and more.

If you want to dive into the sober curious trend that has surfaced in recent years, it is time to learn more about non-alcoholic beers.

According to the research firm Global Market Insights, non-alcoholic beer can surpass $25 billion by the year 2024.

The trend is more popular among millennials for health and wellness reasons.

Now that the New Year is drawing near, the number of those switching to non-alcoholic drinks is expected to increase.

To summarize, beer has a minimal amount of alcohol compared to other alcoholic beverages on the market today.

While it is popularly consumed worldwide due to its refreshing taste, more and more people are switching to non-alcoholic beer for health and wellness reasons.

On the other hand, drinking regular beer is not dangerous to your health as long as you drink in moderation.

Make sure to be a responsible drinker to get the most out of your favorite drink.