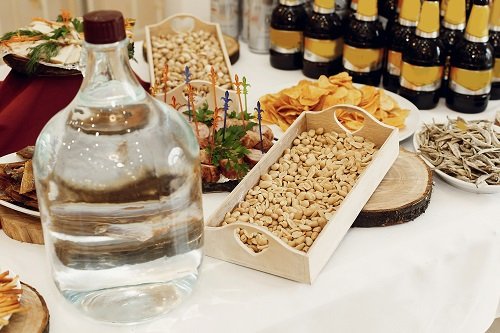 There is a very famous saying that says, “you need to drink beer before any liquor so you won’t get sick; liquor before beer, you will stay clear.”

It usually refers to the idea that you can avoid the horrifying hangover the next day by simply remembering to drink your alcohol in the proper order. Many people swear by this rule, but others have questioned whether it is backed by science.

Can you drink vodka and beer on the same night? Yes, but it is better not to. If you drink beer then followed by liquor, you will most likely get drunk. It is in comparison to when you started with liquor and felt the effects of alcohol earlier. If you end up getting sick afterward, this is because you mixed vodka and beer on that night.

This article will give you some scientific evidence to determine whether having different alcoholic drinks in one night has significance.

The Beer Over Vodka Saying

There are plenty of theories regarding this kind of setup when having a night out. One hypothesis is that most people begin the evening with drinks with lower alcohol content, such as beer and wine.

Then they eventually moved on to the next level of hard liquor as the evening progressed. Another theory is that it’s based on the idea that the liquor’s high alcohol content is most likely to spike their blood alcohol levels in a short time.

It is in comparison with having a beer when they started drinking. As a result, finishing the evening with liquor after a few hours of beer can quickly push a person’s high blood alcohol content. In addition, it can contribute to the hangover dilemma the next day.

Does The Drink Order Have An Effect?

Despite many theories circulating the beer and vodka dilemma, the order in which you consume your drink is unlikely to influence your hangover the next day.

It is because alcohol begins to be absorbed in your bloodstream as soon as it reaches your stomach. As a result, all the alcohol you drank the night before will have been absorbed before the hangover takes effect.

As long as the sum of alcohol you drank remains the same level, drinking liquor before beer would not protect you against hangovers. It is the same aspect in terms of drinking more beer before any liquor like vodka.

With that being said, if a particular order consistently causes you to consume a heavy amount of alcohol than the other, it may be more likely to cause you a hangover the next day.

Interestingly enough, despite all these factors, many people drink alcohol and do not even experience a hangover. So it is despite all the drinking they had during the night and with their drinking behaviors.

It is all thanks to the ongoing research into the effects of alcohol. Many people know that there are many risks associated with drinking. It includes learning and memory problems, impaired driving, unintentional injuries, violence, unsafe sexual behavior, suicide attempts, and addition.

Many misguided beliefs about drinking can fuel your choices or the people’s choices around you. Learning the correct paths can help make the best decisions regarding alcohol. For example, it can be either to drink just vodka for tonight and avoid partaking in multiple alcoholic beverages.

Everyone Reacts The Same Way

As with many things in life, different people have different reactions when it comes to alcohol. Many factors affect a person’s response to alcohol, including body weight, metabolism, tolerance level, gender, and even body chemistry.

It would be best to consider various genetic factors that can play into how your body reacts to drinking alcohol.

Alcohol use disorder does not discriminate, and in the past ten years, there has been a steady rise in alcohol abuse among the ages of 65 and older.

In addition to that, there are many people with alcohol use disorder who are middle-aged and older. These are significantly higher risks for suicide compared to the younger generation counterparts.

When it comes to drinking problems, it is not all about what type of alcohol you drink, whether it is beer or vodka. It is about which days you drink it, and if you or someone is binge drinking every Friday or Saturday night, it could be a problem and can lead to alcohol abuse.

The definition of binge drinking is having five or more alcoholic drinks within a couple of hours. It can happen at least one day in the past month. You need to check yourself if you are doing this.

If you have chronic pain, you need to stop drinking. According to some research, as many as 28% of people with chronic pain misuse alcohol to alleviate their symptoms.

While alcohol delivers a specific amount of relief by slowing down the brain and nervous system, how much alcohol you need to drink would probably be more than the recommended guidelines for safe alcohol consumption.

If you are drinking daily for pain relief, you will likely build up a tolerance, needing more to achieve the same pain-relieving effects. In addition to that, mixing alcohol and painkillers is dangerous and can cause some fatal consequences.

The fact that having a 12-ounce of beer, one 5-ounce of wine, or having an average-sized cocktail containing 1 ounce of liquor is terrifyingly intoxicating.

Each alcoholic beverage is considered to be a standard drink that contains the same amount of alcohol. The myth will occur when you drink 12 ounces of liquor compared to one 12-ounce of a can of beer.

If that is the case, yes, the 12-ounces of liquor might have you hugging the toilet bowl as the night progressed.

There is a famous saying that beer on a whisky might be a little risky. But this saying does not mean that mixing drinks can make you drunk. It is actually a warning on mixing different types of alcohol that can make you sick and experience the worst hangover the next day.

Mixing drink types is usually a recipe for disaster, and you are only going to make it worse by having too much to handle for the night.

It is because your body can only handle and process so much before it goes to preservation mode. Always keep in mind that drinking many anything alcoholic can lead to dehydration and some nasty hangover the next day.

The search of finding ways to avoid a hangover includes many myths. Overall, having vodka and beer on the same night is never a good thing, and this is also applicable to other types of alcoholic beverages.

If you want to get wine drunk, then drink wine or if you’re planning to get drunk by drinking beer, drink beer, not both. If you can’t avoid drinking, remember that you need to have a full stomach, not smoke, and limit how much and often you drink alcohol to prevent a hangover.