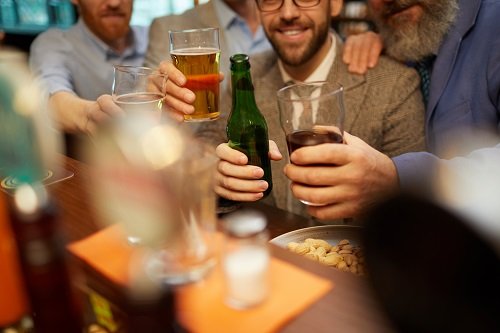 Can 2 Beers Get You Drunk?

There are physical factors that contribute to how fast a person gets drunk.

Among those factors are how much you weigh, your diet, whether you underwent weight-loss surgery, whether you are an alcoholic, and many more.

Can 2 beers get you drunk? Yes, especially if you drink them at once. Downing 2 beers in less than an hour won’t allow enough time for the body to break down alcohol. As a result, you will feel high or drunk.

Below, learn the reasons why you get drunk easily after drinking 2 beers.

Also, in the latter part of this article, check out the tips that can help you stay sober while drinking your favorite beer.

The Effect of Drinking 2 Beers on the Body

Drinking one beer at once alone can make a person feel drunk, which means that it is possible to get drunk by drinking 2 beers.

As mentioned earlier, different factors can result in this, and one of those is how the body responds to alcohol.

Beer contains a small amount of alcohol compared to other alcoholic beverages.

But this small amount can make any person drunk, especially when it is consumed at once or in a short period.

It is possible to get drunk by drinking 2 beers because the liver can process only a limited amount of alcohol at a given time.

The liver works by turning alcohol into glucose to help you sober up.

But because it does not have enough time to do so due to the amount you drank during the short period, alcohol will end up in your system, giving you a feeling of highness or drunkenness.

Another factor that can affect how beer takes a toll on your body is your liver’s health.

An alcoholic gets drunk quickly because their liver spontaneously turns to an alternate metabolism, wherein the liver ceases to turn alcohol into glucose.

Instead, it begins to excrete ketones, which is called alcoholic ketoacidosis.

These substances are similar to alcohol in their chemical components, appearing on blood alcohol tests and suddenly changing the result upwards.

The alarming fact about this condition is that even a small amount of alcohol can trigger such episodes.

When this continues, there will be further damage to the kidney and liver of the person affected.

Tips to Not Get Drunk Easily

If you want to stay sober even after drinking 1 or 2 beers, here are some tips you should remember.

Drinking 2 beers is enough to make a person drunk. This is especially true for those who have low alcohol tolerance, are taking new medications, are dehydrated, and have an empty stomach.

To enjoy more of your favorite beer, make sure to follow the tips that I mentioned earlier.

Also, drink responsibly to avoid accidents, especially if you are planning to drive after drinking.