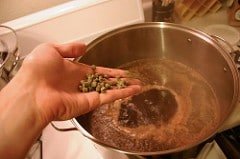 There’s no avoiding it. If you’re looking to brew the perfect beer, you’re going to need some hops.

These cone-shaped flowers are essential to any true beer—but understanding them and how they’re used can take a bit of time.

For those looking to find out how to use hops in beer to make the perfect drink, look no further.

We’ve compiled all the information you need to know to start using hops in beer recipes today. Our comprehensive guide walks you through all the important information regarding this beer-brewing favorite.

Keep the following information in mind as you design your recipe for the ultimate flavor.

With that in mind, let’s get started.

Before we can get started telling you how to use hops, it’s important that you know what they are.

Hops come from the scientifically-known Humulus Lupulus plant. Their distinctive cone shape and their green color are unmistakable.

Though many of us may never have heard of hops, they’ve been an important part of beer brewing for centuries.

Long ago, their ability to help add natural flavor to beers was discovered—it’s only been in recent years that we’ve managed to discover all the other benefits the plants offer, too.

Modern science has revealed that the alpha acids in hops provide essential oils that help improve health and add bitterness to beer.

The natural grains used to make beer offer only a sweet flavor. Hence, without these alpha acids, the beer will become too sweet.

This means that if you’ve been drinking quality beer that doesn’t have an overbearing sickly-sweet taste, it’s likely that the brewer included hops.

But before we go into the benefits and the selection process behind choosing which hops are right for you, let’s take a brief look at hops’ role in beer-brewing history.

By doing so, we’ll establish a better understanding of what makes this great plant so unique.

History of Hops in Brewing

If you’re not a fan of sweet beer, then pre-fifteenth century alcohol likely wasn’t for you.

At the time, brewers did not make wide use of the hop plant and instead relied on other spices to try and give the beer flavor.

Eventually, they branched out and added the hop plant into their brewing recipes.

Moreover, the plant managed to survive as an important ingredient in beers throughout history.

In fact, the presence of hops in beer didn’t diminish. Instead, it thrived. Brewers on the West coast of America decided to up the plant’s role in their brewing recipes.

More flavored beers that rely much more heavily on hops. Instead of using hops as an ingredient to balance out the other flavors in the beer, these brewers made it a primary flavor agent.

Already from this information, it’s clear to see that determining the number of hops right for your beer will be a case-by-case basis.

How Do You Measure Hops

With that information in mind, let’s take a look at how the concentration of hops is measured in a particular beer.

Because hops are the only agent in the recipe that provides a bitter flavor, the presence of hops can be calculated by measuring a beer’s IBUs.

IBU refers to international bittering units and refers to the number of hops present in a particular beer. The more hops that are present, the great the number of the IBU.

As you may be able to guess, high levels of hops in beers will lead to what some may consider an overly-bitter taste.

Surprisingly, modern brewers have developed these bitter beers on purpose to add more variety into the beer scene.

Though they differ in flavor from more traditional beers, these high-hop beers have proven popular within their own niche of drinkers.

If you’re looking to cater to people who prefer a more bitter flavor, make sure that you’re using a greater number of hops.

While some are obvious, such as taste, there are other benefits that might come as a surprise.

For instance, did you know that hops have been linked to cancer-fighting compounds?

Understanding the multi-faceted benefits of the hop plant can help you determine just how many you want to add to your beer. As you weigh the benefits, you can determine what concentration of hops will be best for the product you’re attempting to make.

Let’s take a look at some of the best benefits of adding hops to your beer.

Taste—We’ve touched on this already, but it’s important to note that the most obvious and important benefit of adding hops to your beer is taste. Without adding any hops, you’ll have an overly-sweet product that—quite frankly—fell out of style over five hundred years ago.

Now, don’t misunderstand. We’re not suggesting you go so far as to make your beer bitter. The number of hops you want in this regard is entirely up to your personal preferences.

For those just looking to balance out the sweet flavor of their beer, a moderate number of hops should do the job. However, those looking to highlight the bitter flavor of the plant should consider adding more.

What’s important is that the flavor of hops cannot be avoided—as long as you’re adding them early in the process. If you’re trying to load up on health benefits by adding extra hops, you’re naturally gravitating to more bitterness.

Make sure that you work with your taste in mind.

They actually work to kill bacterial microbes that would otherwise make your beer unsafe to drink.

By adding hops to your drink, you can help make sure that it stays fresher, longer. This is an important part of the brewing process for obvious reasons—especially if you plan to ship and sell beer over any distances. Be sure to include hops in your recipe to enjoy these long-lasting benefits.

Improved Health—Xanthohumol is a leading flavonoid found in hops, but it does much more than add flavor. Recent research indicates that this important compound can actually fight cancer, including leukemia.

This means that beers flavored with hops might actually help prevent some types of cancer if drank regularly. Just be sure not to overdo it.

For brewers, this means that including hops in your recipe could actually help your customers. And what could be better than that?

As you can see, there are several important benefits to adding hops to your beer. How much hops you want to add to your recipe directly correlates to the benefit you’re trying to get.

And to one other thing—how you use them.

That’s right. One final piece to the hops puzzle is how you choose to incorporate them into your brewing process.

How you use them can influence your beer. So, let’s take a moment to analyze the different ways of using hops for the brewing process.

There are two main ways to use hops in your beer. The method that you’ll want to use depends on the effect you’re going for.

The primary method is to include hops while the brew is still boiling. It’s at this stage that you can actually get the full benefits of the hops, as the plant is broken down and made an active part of your recipe.

Hops put into beer at this stage will have a direct effect on the flavor. In other words, if you want your beer to have that bitter balance, this is the time you put it in.

It’s also the time that the other two benefits come in. Whether you want an overly-bitter beer or not, it’s a good idea to put at least a small number of hops in at this stage. By doing so, you can seriously improve the flavor and the overall shelf-life of your beer.

Some brewers also like to include hops in the final ten minutes of the brew. In this way, there’s not enough time for the plant to actually break down and impart its characteristic flavor.

Instead, a hops aroma is given to the brew for a heartier feel. Additionally, the essential oils that are found in hops are better preserved if added in at this time, as their aroma and oils will evaporate if boiled for too long.

Some brewers take it even further.

While we generally think of hops being added to the brewing process during the boil, the process of “dry-hopping” refers to the act by which hops are added after the boil.

Dry hopping has its own benefits, but it’s mainly used to increase the hop aroma of a particular brew. It’s possible that these hops will have a small effect on the taste, but hops that haven’t been boiled aren’t as bitter as their boiled counterparts.

Understanding how hops can be used and added to your brewing recipe is important in determining just how many you use.

As you can see, controlling the use of hops during the brewing process can have a direct effect on the outcome of your beer. Be sure to take this into consideration when calculating the number of hops you’ll need for your recipe.

While it’s easy to talk about hops in generalities, there is actually a wide variety of hops available.

This means that finding the right hop for you might take a bit more time than you had expected.

The good news is that certain hops have become favored in the industry. A look at industry trends shows just how different hops shine when added to your brew.

Let’s take a brief look at some of the different hops and how they can be used.

The majority of hop production now lies in the United States. Europe as a continent, however, outpaces North America with several different types of hops grown.

As you look to perfect your brewing recipe, take the time to understand the different hops from each region so that you can find the one that’s right for you.

Adding hops to beers is an age-old practice that helps add balance to the flavor. Additionally, it can have surprising health benefits and keep your beer fresher longer through its microbial properties.

If you’re looking to find out how many hops you should add in your beer, the answer isn’t quite so simple. Instead of looking for a blanket number, keep in mind the different characteristics hops bring to your beer. With this information, you can better determine how many hops are right for your recipe.

By understanding this and the hops brewing process, you can make a beer that captures your desired flavor. As you move forward with your brewing plans, be sure to consider all that hops have to offer.