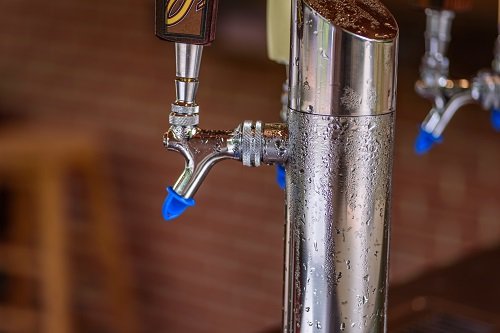 Can You Untap a Keg With Beer in It?

Anyone who has ever been to a college keg party has seen a keg in action. The hardest part of serving keg beer is consuming the whole thing in a few days and keeping it cool.

Can you untap a keg with beer in it? Yes, you can untap a keg with a beer in it, provided your kegging kit has only CO2 inside. CO2 will prevent any foreign gas from entering and will allow you to tap and retap the keg as you like. No worries, as this will not make your keg beer flat.

The only hindrance in untapping a keg with beer is that it might go flat and ruin the whole experience. This article will teach you how to keep kegs from going flat and how to untap a keg with beer.

How to Untap a Keg

The Keg Must-Have CO2 in It

As CO2 is produced during fermentation, it is the best gas source for dispensing draft beer. I do not recommend compressed air as a gas supply.

The brewing industry is spending millions of dollars to keep oxygen out of the kegging kit. It is harmful to beer production to add air pressure to the beer keg.

Air compressors are washed, and the compressor oil mixes with the air. The results are that the beer scent and taste are off.

Pressure should be set via a pressure gauge that uses PSI to release the correct volume of gas into the keg. A steady PSI keeps the beer completely carbonated by retaining the CO2. It dissolves in the beer and cannot escape from the keg.

Always consult with the draft technician about setting the regulator pressure. For most domestic breweries, the recommended CO2 pressure for a keg refrigerator at 38°F is 12-14 lbs.

The degree of carbonation that the breweries specify will preserve this pressure. If the alcohol is dispensed under very little pressure, the CO2 absorbed in the beer can burst out over time.

However, do not dispense beer under so much pressure. It will lead to more CO2 in the beer. The result will show up over time in the form of foamy beer servings.

When There Is Too Little Pressure

Too little pressure can induce foamy beer as it reaches the bottle. If you fail to lift the pressure to an acceptable amount, your beer will turn flat. A telltale indicator of low pressure is when you see foam or bubbles forming in your beer hose.

The foam will look loose if your beer is under-carbonated. It will appear like a soapy beer with tiny bubbles forming.

When There Is Too Much Pressure

Too much pressure will leave you with foamy beer that comes out of the faucet at a fast speed. If your beer is over-carbonated, big bubbles can make the foam look tight.

This problem is easier to solve. Shift the strength of your regulator to the acceptable lower level and draw a few foamy pitchers. Use the escape valve on your coupler to bleed out the excess strain. These moves will cause the system to re-balance itself.

You can draw CO2 into the beverage if the heat is left too high for too long. This will result in a permanent over-carbonated and over-foamy beer. As soon as you detect any problem, act on it immediately. Call a technician to help you.

The bottle is full of wasteful foam instead of liquid with only the proper amount of creamy head on top. Here are some ways to adjust it:

Cloudy or hazy beer is unattractive and off-putting. If you experience this problem, try this:

Beer has a certain effervescence that helps improve the experience of drinking it. Flat beer is the exact opposite problem of beer that is too foamy or over-carbonated.

A keg is a metal storage unit for beer that provides fast dispersion under pressurized carbon dioxide or nitrogen. The brew will take a gradual journey toward going flat and losing its taste, scent, and crunch.

Yet, when using a keg, there are a few major considerations to take into account. The following will prolong the life of the beer you are drinking.

Store in a Cold Environment

Pasteurization destroys bacteria and heat without any loss of taste. However, a keg of beer is not pasteurized. It is, thus, necessary to maintain the keg at a temperature of less than 55ºF.

Do not increase the temperature past this level. Dormant bacteria inside the beer will become active and destroy the beer.

After you tap the keg, it is called new for only roughly 8 to 12 hours for dispersion. When serving, hold the keg at the right angle. Pressurizing can help prolong the beer’s life to its greatest capacity.

Do Not Over-Pump Your Keg

Excessive pumping will raise the pressure and induce the formation of foam. Before you mount a pump, make sure the keg is pressurized. Before dispersing the first few beers, there is no need to pump the keg.

Pour the first few beers without any pumping after attaching your pump. This will cut the foaming that an over-pressurized keg creates.

You do not need to think about oxidation. The beer goes skunky if you use CO2 for pressure when untapping. It should last around a month or longer. If you use a hand pump, you’ll start to taste a difference after a week or two, assuming you keep the keg cool.