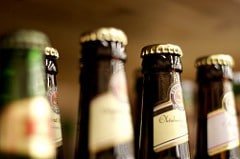 The Beer Has Gone Bad ~ How to Tell When Your Beer Has Gone Bad. Let’s face it: we’ve all been there. You walk to your fridge and find an old bottle of beer sitting in the back. It looks good, but you’re not too sure.

Did this come out of the last pack you bought? Could it be even older?

Should you try to drink this one or go all the way back into town to get something… fresher?

If you’ve ever been faced with this burden, you understand just how pressing of a situation it can be.

Because here’s the deal: when you’re in the mood for a beer, not just anything will do. You want that cold, crisp flavor that you’ve come to know and love.

And, trust us, if your beer is old, it’s probably not going to deliver it to you.

Fortunately, there are some ways you can tell if your beer is bad without ever tasting it. If you still can’t tell, however, there are other indicators that can let you know quickly if your beer has gone bad.

Join us as we go over some of the most common signs that your beer has gone bad. By keeping these tips in mind, you’ll be able to better avoid drinking old or expired beer.

In doing so, you can keep from being disappointed by the sometimes-putrid taste of older beer.

Without further ado, let’s take a closer look at the top five ways that you can tell if your beer has gone bad.

Use these tips at home, at the bar, or even the office party to make sure that you’re getting only the freshest beer around—no matter where you are.

Stop and think: what’s the first sign that your food has gone bad?

Well, it’s almost the same with beer. Though you likely won’t be able to smell it through the bottle or the can, once you open an expired beer, you should be able to tell a difference in the smell.

This can be a mild difference at first, especially if the beer isn’t that old or if it hasn’t been exposed to extreme temperatures.

But as any brewer can tell you, a skunked beer is one that will make its presence known.

Named after the awful smell a skunk gives off, skunked beers are those that have baked in the sun’s UV radiation a bit too long.

These rays serve as a catalyst for an intense chemical reaction that will leave your beer looking and smelling different.

The good news is that you never have to worry about accidentally drinking a skunked beer. As soon as you open the can or the bottle, you should immediately be able to detect its distinct, pungent odor.

This can prevent you from drinking one of the foulest-tasting beverages around.

It’s important when you store your alcohol that you do so in a cold, wet place. You don’t want to expose your drink to high sunlight or other UV lights—even during the brewing process.

The effects this UV radiation can have on your beer are far-reaching and can occur quite quickly depending on the intensity of the light.

If you’re looking for a great-tasting beer, be sure to keep yours as far away from light as possible.

In doing so, you’ll keep it fresher, longer.

Even if you store it properly, however, this isn’t a guarantee that your beer will last forever. While it may not ever technically go “bad,” your beer will suffer from a great decline in taste quality if left long enough.

When this happens, even if it’s not skunked, you may still notice a distinct odor as the compounds within the beer has broken down.

This occurs when hops and other ingredients within the beer start to oxidize and separate.

So next time you smell a strange odor coming from your beer, you may want to consider chucking it. Even if it won’t make you sick, your beer can easily be replaced by one that’s colder and better.

The smell isn’t the only indicator that you get that your beer has gone bad before you actually taste it.

Depending on old your beer is, it may have even changed in appearance, too.

The exact change in appearance depends on the type of beer you drink. That’s why it’s so important that you’re able to recognize changes in the appearance of your beer so that you can tell when something is off.

Appearance changes typically occur alongside those that smell, so if you’re unsure if your beer has changed its look, check and see if there’s a smell associated with it.

If not, it may just be a trick of the light. You’re good to go.

If so, you, unfortunately, have an old beer on your hands.

While this isn’t the end of the world, it can be a major hindrance if you’re looking to have a bit of fun.

Not only may it taste bland, but you may also get the sensation that you are chewing on cardboard.

Unlike wine, few people find the taste of aged beer desirable. Though the exact flavor depends on the type of ingredients used, the process of oxidation can tremendously affect a beer’s taste.

During this phase, oxygen in the air reacts to compounds in the drink, significantly altering its flavor.

This can cause a number of taste changes, depending on the brew that’s been made.

Some of the following are the most common taste changes as reported by those who have drunk old beer:

Older beer is likely to taste more bitter. This is because hops within most brews will begin to break down.

Hops were originally added into the beer just a few short centuries ago, and they’ve become a favorite way for many to reduce the sweet taste of grains.

Because hops are bitter, they’re able to balance out the flavor of natural beers. This helps create depth to the flavor and makes it more palatable to the customers’ tastes.

However, the story changes as beer ages. Hops will begin to break down even further, and as they do, they will make the drink increasingly bitter.

If this is something that you wouldn’t like, make sure that you’re not drinking old beer—as you may be in for a rude awakening.

On the other hand, others have claimed that old beer doesn’t retain any flavor of the hops. Instead, they taste more watered-down and staler, a kind of pale imitation of what beer would taste like if it were fresh.

Perhaps most common of all, however, is the charge that older beer tastes like cardboard. Several individuals have claimed that their old beer tastes like dull paper. This makes it sound like a very unappetizing way to spend your Friday night.

The good news is that once you detect any of these flavors, you can instantly know that you are going to need to invest in a new beer.

Because these flavors are so distinct, you don’t have to worry about drinking a significant portion of your beer in order to get an accurate reading.

In this way, you can enjoy greater flexibility in choosing alcohol that is fresh.

Though this may be common, it’s also a good idea to check your beer to see if you can find an expiration date.

You may find this on the bottle as well as on the package that it came in—depending on the company.

It’s worth noting here that the date on your bottle is more of a guideline than a strict recommendation.

If you’ve got an expired beer but has been cooling during that whole time, it’s likely a safe bet that you can drink it without noticing any signs that it’s gone bad.

If the beer were five months old, however, you may be putting yourself at risk for experiencing several undesirable side effects. While these aren’t dangerous and won’t make you sick, they can be quite disgusting.

You may find that the expiration date is printed on the bottom of the bottle or can, but be sure to check all over because this placement may depend on the brewing company.

Temperature is one of the single-most powerful determinants of whether your beer has expired or not.

If you understand the history surrounding the temperature around a particular beer, you can pretty much guess whether or not it’s going to be good.

Those who know alcohol know that beer will go bad quickly in hot temperatures. By this, we mean that it may undergo the process of skunking or simply get older because it wasn’t stored in a cold-enough environment.

Frozen beer, too, is likely to put off those looking to drink it.

What becomes more complicated, however, is the fact that it’s not just the extremes that can affect the taste of beer.

It’s the temperatures that beer has been exposed to and in what period of time.

If you’re brewing a beer, for instance, it can be tempting to freeze your product as soon as you are done.

This turns out to be shortsighted, however, as it will likely cause your beer to decrease in taste quality quicker than anything else.

This is because the beer doesn’t respond well to drastic temperature changes.

The same thing would happen if you went from having your beer bottle in the fridge to sticking it in a bright windowsill.

Because you’ve changed the temperature of your beer so quickly, there’s a strong possibility that it will have developed a strong odor and taste.

And if this happens, you’ll be able to tell that your beer has gone bad.

By understanding this history about certain beers, you’ll be equipped with the foresight to know that a certain bottle has probably gone bad.

This can keep you from doing unnecessary smell and taste tests, as these can leave you feeling disgusted.

As a side note, make sure that your beer is stored in a cool, dark place at all times if possible.

If you are unable to do this, it’s still important that you never place your beer in direct sunlight—and that you store your beer in as cool a place as possible.

In doing so, you’ll be able to prevent these beer-aging effects from taking hold for as long as possible.

This means that you can enjoy fresher, crisper beer for longer.

With all this in mind, it is also important to note that old beer is generally safe beer.

Expired beer doesn’t mean that it will be unsafe for you to drink. However, as we’ve noted, the taste of this beer can be severely displeasing.

If you come across expired beer or old beer or drink it by mistake, don’t freak out. Though your natural reaction will likely be to spit it out, unless it’s been drugged or doctored in any way, this bad-tasting beer is still safe.

In short, there are several ways that you can tell if your beer has gone bad.

Fortunately, most of these methods don’t involve actually tasting the beer. This can help prevent embarrassing and unsavory episodes.

By keeping in mind the five tips listed above, you’ll be on your way to distinguishing bad beer in no time.

Remember, the most-effective way to tell if your beer is old without tasting it is to give it a good smell. Even then, though, the practice must come with a warning because old beer has the potential to smell quite potent.

Next time you come across a beer that you can’t date, follow the tips above so that you can ensure that it’s fresh and right for you.