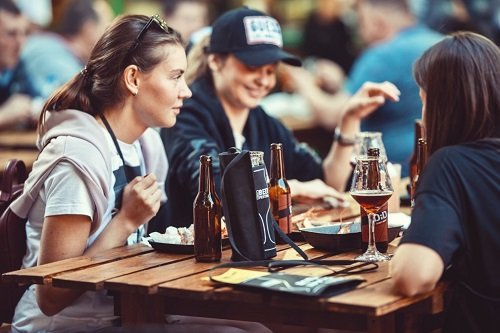 Beer, like any other food, is an organic product. They are a product from plant ingredients that, like all living things, will eventually decompose. Brewers strive to brew beer that lasts long, but nothing can withstand the onslaught of bacteria and chemical reactions.

How long can you drink beer after the expiration date? You can typically drink expired beer six to nine months past the expiration date. You can refrigerate it to extend your shelf life. It all depends on how sensitive you are to the unpleasant flavors associated with lousy beer.

In this article, I will discuss what it feels like to drink an expired beer. I will also teach you the correct ways to store your beers to extend shelf life.

Beer does have an expiration date. However, it is a little deceptive to claim that the beer expires. It does not become harmful to drink, but it begins to taste unappealing or flat.

Beer is one of the products from organic plant materials that decompose over time, just like other foods. Brewers strive to make their beer last as long as possible.

When correctly brewed and packed, the only things in your beer are the ingredients and the tiniest quantity of air. Here are things that brewers consider to attribute a longer beer shelf life.

It’s impossible to package beer without even a trace of oxygen. The oxidation process modifies the beer over time and contributes to a variety of flavors.

With a dash of sherry, it can take on stale, cardboard-like flavors. Some malty beers produce sweet, grainy, caramel, and toffee flavors.

The temperature affects the rate of oxidation. If the stagnation is slow, the colder the weather. As a result, you should keep your beers cool in the freezer.

The born on or packaged date is the finest for us, the drinkers. It allows you to choose the best day to drink it.

Knowing When Beers Are Bad

There are a few things to keep an eye out for, whether they are evident or not.

If a beer has a high alcohol content but few additives, it’s a suitable candidate for cellaring. As a result, drinking an old stout is perfectly acceptable and even recommended.

As soon as brewers put IPAs and Pale Ales in cans, they go stale. They’re best on the first day. In reality, you only have a three-month window for hoppy beers — possibly a little longer if it’s a high-alcohol beer.

The older a sour gets, the better it becomes. They may also deteriorate. Drink it and jot down some notes in your beer journal.

Lagers and Pilsners have a longer shelf life. They’re already a little skunked, but that’s just a matter of taste. Unless it’s a hoppy lager, it doesn’t make much of a difference to me. However, fresh is usually preferable.

Fresh beer is always preferable to old beer. The flavor profile of beer begins to change as it ages. With an expired beer, some of the aromas, flavors of a new beer are gone. However, it isn’t fair to say that you can’t drink a beer that has passed its expiration date.

You may have discovered some expired beer in your garage while hunting for alcoholic beverages. You are wondering if it’s worth the risk.

First, you have to know that it will be flatter than a model’s stomach. It may also have a rotten flavor. It also means that the delicious flavor you’ve come to expect has vanished. Instead, there would be a variety of unpleasant flavors with a beer that had oxidized.

Even if you won’t get ill from ruined beer, it’s still bad for you. You could feel a little sick after drinking it. Instead of messing with cans or bottles that have gone bad, go for another beer run.

What if you need a taste test and there is no expiration date visible? You can if you want, but there will usually be more signals that beer is terrible news. You may see that the sticker is old and weathered. The beer itself may have changed color and a dust-like layer at the rim, making it a little muddier.

A skunky smell should be self-evident. Yes, a skunk isn’t exactly a pleasant odor, but a skunky beer isn’t always a good beer. This part is where the name “skunked” comes from, which many people use to describe terrible beer.

Some beers come in colored bottles and, as a result, become skunky, which many people appreciate. As a result, skunky beer isn’t always symptomatic of a terrible brew, which might be perplexing.

Unpasteurized beer is an exception to the rule. You should avoid drinking this type of beer that has gone bad because it can make you sick.

Some brewers refuse to pasteurize their beers because they believe it improves the flavor. Always consume unpasteurized beers as soon as possible.

Because several factors determine how long a beer will last, sell-by dates are usually simply a guess. Below are some aspects that you need to consider when it comes to your beer.

Cans are superior at keeping beer fresh for a long time. They block out direct sunlight and seal out oxygen and any impurities.

If you don’t want to use cans, that is okay. You can use brown glass bottles that act as sunglasses to block UV radiation and avoid skunking. You can use green bottles as well. The least resistant to UV light are clear bottles.

Before you buy the beer, how does the vendor store it? It’s vital to keep it out of direct sunlight, and refrigeration will prevent aging and allow the beer to last longer.

Check to verify if bottles and cans are upright. It will reduce oxidation more effectively than if you keep them on their sides.

Distance affects the aging of the beer by how far it travels within its distribution area. Long road travels mean your beer is older by the time it reaches you.

It increases the chances of it being disturbed, left in the heat or sun, and so on. Fresh beer is, in general, a local beer.

How quickly does it sell where you acquired it? If your favorite beer is hard to come by, you can bet it is not sitting around for long. The rare artifacts gathering dust may be much older.

Extending The Shelf Life Of A Beer

Some people only enjoy the occasional beer but don’t drink regularly. If you are one of them, buying the best beer fridges for your home is a great place to start.

You can limit the damage to the flavor profile of the beer by keeping it cool. A dark environment, which a fridge may provide, is also the best way.

You’ll have more alternatives when it comes to extending the life of your brew, depending on the type of beer you drink.

Here are some tips:

However, there is one exception to this rule. If the beer’s container has been tampered with in any way, the beer may be dangerous to consume.

Air exposure can cause the alcohol in the beer to evaporate. It will create bacteria that can make you sick. Aluminum cans have elements that may also leak into the beer over time. If you’re considering an expired beer, drink from a glass, keg, or similar product instead.

It’s fair to assume your beer is not good to drink if the color or fragrance has altered. Regardless of how long you can drink beer after its prime, we don’t advocate it.

Beer is a terrible thing to throw away, so savor it while it’s still cold. The only way to drink it is the way you should drink it – fresh.