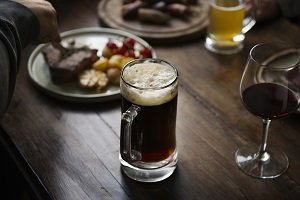 Knowing and using the suitable methods for mixing alcohol can make your nights out more enjoyable and your mornings less painful.

Can you mix beer with wine? You’ve heard it from your pals and your dad: don’t mix alcoholic beverages. Just recently, though, a new drink appeared on the scene: beer-wine hybrids. But then again, mixing is also science. If you fail to do it the right way, you will get a foul-tasting beer-wine mix.

Some love beer and wine, but can you mix them? In this article, we will discuss the beer-wine hybrid. We will list the most famous in the market and how to make one for yourself.

Beer and wine drinkers appear to be on opposing sides of the spectrum. On the other hand, craft beer has brought the two worlds closer together in recent years.

To create a beer-wine hybrid, breweries combine grapes with raw grain. Both are fermented at the same time. They occasionally include pieces of leaves, skins, seeds, and stems in the mix – a must. They have to add the must to the mix to give the hybrid a robust flavor.

The finished product has a wine-like aroma but a beer-like mouthfeel.

Vigneronne de Cantillon is the grandfather of oenobeers. Aged lambics are combined with sweet muscat grapes in this Belgian classic. The sour lambic is made after initial fermentation.

The white Italian grape must is then added during the secondary fermentation to boost the sugars. After that, the two beers are matured separately for 18 to 20 months before being mixed and bottled.

You’ve got a Belgian lambic that’s on the sweeter side of the beer spectrum. This beer has a noticeable lambic funk, but it’s balanced off with a texturally smooth and tangy vinous edge. It features a mild grassy flavor with a lot of seasoned wood overtones.

The American version of Cantillon’s Vigneronne is the next beer to drink on your oenobeer trip. Spon Muscat by Jester King is essentially the same beer made in Texas with American components.

A substantial amount of muscat grapes produced in Texas is the best addition to a spontaneously fermented ale. The result is startlingly identical to the Belgian version, yet subtle differences distinguish it as uniquely Texas.

The bright orange ale pours with a grape aroma on the nose. This sip features citrus acidity, oaky-aged flavors, dry-grape sweetness, and lambic sourness. A slight creaminess lends a silky texture near the conclusion—the citrus hints at ripe orange, and the wood fade into a sour finish.

Okay, for this one, you’ll have to travel to Denver. We strongly encourage people to travel to sample new things, and beer is undoubtedly on that list.

Liberati is a posh Italian-American restaurant that also doubles as an open brewery. On their menu, they have a broad selection of beer-wine hybrids to taste. One of the faves is Gino Docet, their Imperial kölsch.

The beer is a traditional lager made with pinot grigio grapes from Oregon’s Willamette Valley. The result is a massively drinkable beer with a light, crisp edge and a herbaceous sensation of a bright day in a grape orchard.

It reflects the impact of white wine on sour beers. To start the fermentation process, they combine the Chardonnay grapes with pilsner malts. The beer is hopped with classic German hops before a secondary fermentation with wine and Belgian abbey-style yeasts.

On the first sip, there’s a strong impression of wine fruit. After that, there’s a lovely layer of hop bitterness that complements the ale’s sour undertones. Orchards of vine fruits that feel sunkissed and somewhat sweet run through the sour, tart, and bitter.

Stillwater Artisanal’s Oude Bae is a red wine made with pinot noir grapes and an amber sour ale. They let the mix mature in French wood. Also, the beer is a cross between a tart and heavy red pinot noir and a richly nuanced amber ale. It’s a near-perfection of two universes colliding.

This one opens out with rich red grape notes. Before an oaky note comes in, a yeast funk creeps in to balance out the richness of the fruit.

The weight of the red fruit imparts a sourness, which is countered by the yeast stink. When the sip fades, there’s a lingering smokiness that ties everything together.

Dogfish Head has lots of fun in the oenobeer sandbox. They’ve been developing beer-wine hybrids for a long time, and Mixed Media is one of their best. They use a viognier grape in this combination, which they then combine with a Belgian-style Saison. The beer has 51% grain malts and 49% wine must.

This beer is light and breezy. Melon and acidic grape aromas coexist with a beautiful depth of spice and oaky velvet.

The sharpness of dry white wine is perfectly balanced by the malty character of a well-hopped saison. With a hefty 7.5 percent ABV, it’s a sensory treat that gives you an excellent and intoxicated feeling.

Mikkeller is a new IPA brewed with Riesling juice. The origin is Danish gypsy-brewing global behemoth Mikkeller, and it is possibly the most approachable beer/wine hybrid. This hoppy brew begins with a tropical-fruity aroma and ends with a sweet grape blast.

Holy Mountain Brewing Company in Seattle makes some of the best farmhouse beers in the country. It has begun an experiment into aging beer in oak on wine grapes using Sacrament.

The initial batch is a wheat-based brew matured and fermented on Walla Walla Valley Carménère grapes and skins. When you taste it, it has a fruity wine scent complemented by a sour, tannic astringency.

Brasserie Cantillon produces some of the most sought-after classic Belgian lambics, but Saint Lamvinus has its cult following. Beer nerds sometimes claim that a good lambic can mature like fine wine, so infusing it with grapes is only natural.

A combination of lambics is barrel-aged with merlot grapes for more than a year. It pours a magnificent maroon color, with a nose of rich fruit and wood on the palate.

Get ready to pucker up because this mixed fermentation Saison is a force to be reckoned with. The ERO brews from Burdock are a series of beers that pay homage to the Montmorency sour cherry.

This fourth incarnation was fermented for five months on Niagara-on-the-Lake Cabernet Franc grape skins before being aged for another 30 days on cherries. It is foot-stomped, not pressed, for authentic flair.

The result is a fruity, slightly tart beer. A limited edition was released in February and quickly ran out at the brewery. However, it is still available at bottle shops 4th and 7th across the street.

After maturation, this barrel-aged sour is refermented with Blanc du Bois grapes cultivated in Texas. A fruity and woody tart backdrop meets the depth of white wine.

TRVE, a band of rustic metalheads, can always be counted on to release something worthwhile, and Ecate is no exception. This creative brew makes something lovely out of what is effectively leftover.

A golden sour matured in cabernet sauvignon pomace (the pulpy solid leftovers of fruit after pressing for wine). It is citric, dry, and bubbly to the max.

This grape brew has a combination of Pinot Noir and Sonnen Hill cherry beer. It’s similar to enjoying a glass of rosé wine.

The flavors of subtle cherry, sweet almond, and toasty spice reach the palate right away. To get the most out of the cherry and red fruit aromas, serve it chilled.

Anyone who tried sampling beer from Upright Brewing Company knows how unique and jazzy its brews are. Oregon Native is an example of a genuinely unique item.

Consider a pinot noir with a beautiful red fruit fragrance and a musty wood perimeter. It’s been barrel fermented in partnership with Patton Valley Vineyard, and it is a combination of pinot noir grapes and native wine yeasts.

It has also developed a version without carbonation under its Sole Composition line, emphasizing the wine-like aspects of this hybrid jewel.

Blending can be as primary as mixing beer wort and wine and allowing them to mature. However, the real excitement comes when you’re trying to get that right flavor balance in your completed product.

Running some blending trials of different beers and wines is a terrific experiment that you can do at home. Want to produce a potent porter with hints of cabernet sauvignon or a saison with a hint of fruity riesling? The trials are about to commence.

To begin, ferment your two base products separately for later blending. Remember that the result will only be as good as the basic beers and wines used to create it.

The tasting begins once you’ve finished your batch of beer or wine. Mix different proportions of your wine into the beer and then taste them to see which one you prefer.

You might find that a porter needs 20% cabernet to have a nice flavor. On the other hand, a Saison can mix up to 50% riesling to make something truly distinctive.

It’s an excellent idea to have some basic graduated measuring cups. It is also a good idea to have a pen and a notebook on hand while undertaking blending trials.

Make a few different blends by altering the quantities of the same two base beers/wines. For instance, mix one beer with 10% wine, 20% wine, and 30% wine.

Before tasting, take careful notes on how much of each base beer/wine you used. Small trials like these will allow you to pinpoint the exact quantities of your beer and wine. It will let you achieve a truly balanced flavor profile.

Once you’ve found the appropriate mix, you may measure out more significant quantities of the basic beers and wines to combine.

The possibilities are infinite, and there’s no such thing as a lousy blend; it’s all a matter of personal taste. Try a Chardonnay with a hard pear cider or a blackberry mead in an American brown ale.

What You Need To Know

Beer-wine hybrids aren’t for everyone, to be sure. They have an odd, musty flavor, and they’re hardly the kind of beer you’d crack open and enjoy at a BBQ. This is primarily a beer for wine drinkers.

Beer-wine hybrids, like wine, must be sipped and appreciated, which irritates many beer enthusiasts. This hybrid is not something you should recommend to a beer drinker on the spur of the moment. You’ll wind up with a disgruntled customer if the flavor is too odd.

This blend is better suited to the wine market than the beer market. So, you may want to feature it prominently on wine lists. It is also good to put it in a prominent location where experimental beer drinkers will notice it.

This hybrid is bottled like a bottle of wine and sold alongside wines in liquor stores. It makes it a gateway craft beer aimed at gaining new converts.

Beer-wine hybrids are more appealing to wine fans. Breweries usually market these as wines. So, we suggest making sure to include aromatics and complexity descriptors in your menu.

Beer-wine hybrids serve a dual purpose. They serve as an introduction to craft beer for wine consumers or as an entry into natural, fermented wines for beer drinkers.

They usually have the same low alcohol content as beer and a similar texture, making them infinitely crushable. They also have a wine-like flavor due to skin fermentation.