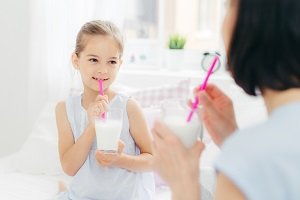 Beer manufacturers release Non-Alcoholic beer products to improve people’s health and prevent drunk driving. These beverages show surprisingly strong sales, especially during the quarantine, as many are interested in improving their health.

Since it doesn’t contain alcohol, and in fact, it is commonly found in the soft-drink section, most people are wondering if it is okay to allow kids to drink non-alcoholic beer.

It Is Okay For Kids To Drink Non-Alcoholic Beer

A parent once asked if it is okay to give non-alcoholic beer to a child, and many seem interested in the topic. According to a waitress, she has met parents ordering such drinks for their children, which seems pretty standard for them.

Another answered the question and said it was customary to allow children to drink even alcoholic drinks in the U.K., so why not its non-alcoholic counterpart?

But in Germany, a person should be 14 to drink any beer, alcoholic or non-alcoholic, so that children won’t get used to the taste of beer at a very young age.

Children Should Not Drink Non-Alcoholic Beer

While there are people who approve of children drinking non-alcoholic beer, others seem to find it problematic.

One brewery says that regardless of the product’s safety aspect, non-alcoholic beer is not designed for children. It was intended for adults who are 20 years old and above.

People in South African are also against the idea because of possible alcohol abuse. To start drinking beer at a young age, even those that do not contain alcohol can become a much more substantial problem in the future.

According to an educational psychologist named Mandy Arnott, this possible problem should be addressed right away.

Yes, non-alcoholic beer has a drinking age requirement in the U.S. You have to be 21 to buy and drink one, which for some people doesn’t make sense since it seems to have no alcohol.

However, beer is still beer. Non-alcoholic beer is still classified and regulated as an alcoholic drink. Part of it is because the term non-alcoholic in the beverage’s label doesn’t actually mean it has no alcohol at all.

Non-alcoholic beers do contain alcohol but with minimal amounts. They contain no more than 0.5% A.B.V., making people think it should be non-intoxicating instead of non-alcoholic.

Since alcohol is still present in such beverages, U.S. law regulates its distribution, allowing only 21 years and above to buy and consume the beverage. It explains why you have to show proof of identification showing your age when ordering non-alcoholic beers.

For some people, this limitation is unfavorable as they can’t enjoy drinking beer without the worry of consuming more alcohol than recommended.

But, there is research that non-alcoholic drinks might have damaging effects on minors who consume such beverages. One expert said that minors who start drinking non-alcoholic beverages during puberty could develop alcohol dependence problems.

Why You Should Avoid Non-Alcoholic Beer

Here are some of the basis why you should avoid giving non-alcoholic beer to your kids. This list is also intended for adults who want to remain sober and avoid going back to alcohol dependence.

The Power Of The Smell Of Beer

According to a research study, the smell is enough to stimulate cravings and subsequent relapse among alcoholics. Smell induces a neurochemical response inside the brain that restores alcoholic-seeking behavior after abstinence and withdrawal.

Researchers trained rats to administer alcohol or a bitter by themselves. A bitter is a white substance called quinine, derived from the bark of the cinchona tree.

When they smelled either banana or orange, the smell of banana was utilized when the rats drank alcohol. Meanwhile, the scent of orange is used when the rats taste quinine.

According to the investigators, both alcohol and the anticipation of alcohol might increase dopamine levels, a chemical in the brain essential in feelings of pleasure and delight.

It is found that in the rats’ brains, there’s an increase in dopamine before and after smelling these “alcohol-related cues.”

Another reason children and adults who want to stay sober should avoid drinking non-alcoholic beverages is that it triggers the development of the same behavior and attitudes of an alcoholic.

A California research says that 90% of alcoholics experience one relapse in four years after stopping their alcoholic drinking habit.

Experts recommend developing a drug-free, alcohol-free lifestyle to avoid relapse and stay sober. They mean that a drug-free lifestyle is to substitute healthy activities for the bad behaviors you have developed in the past.

For instance, many individuals undergoing recovery realized that they need to make a new set of friends who don’t drink alcohol. They also believe that hanging out with their old circle is not good if they want to stay sober.

When you allow your kids to drink non-alcoholic beer, it is the same as allowing them to develop a lifestyle that could lead to alcoholism in the future.

It is mainly that non-alcoholic beverages still contain alcohol even with minimal amounts. It would help if you kept your child sober by not allowing them to drink such drinks.

Also, sharing a conversation while drinking beer with your old friends in the same places you drink is the same as your old lifestyle. When you continue doing these things, you are not developing new healthy habits.

The Benefits Of Non-Alcoholic beer

People who are watching their diet would go for low-calorie drinks. Among the benefits of non-alcoholic beer is its low-calorie content, allowing beer lovers to reduce their daily calorie intake.

Let’s compare drinking a pint of 5% strength beer and a 0.5% strength non-alcoholic beer to show you an example. The regular beer has 239kcal, which is equal to one standard size of Mars Bar.

Meanwhile, consuming a non-alcoholic beer will leave you getting only 50 calories per 330ml can.

However, you should know that there are non-alcoholic beers that come with added lactose. It means that these beverages might give you more calories than regular non-alcoholic drinks.

It Can Help You Cut Down Your Drinking Habits

Another benefit of non-alcoholic beer is that it allows you to consume less alcohol, refrain from alcoholic drinks, or totally forget it.

These beverages are also a great choice when drinking on a night out, you are assigned to drive, or opting for a sober night. Most of the time, people reach out for soft drinks during these events, which is unhealthy as soft drinks are high in calories.

Non-alcoholic beer nowadays tastes better than before. Breweries manufacturing these drinks are constantly innovating with their products to meet consumer demand.

It Won’t Get You Drunk

When consumed in a controlled amount, non-alcoholic beers won’t get you drunk. These beverages contain 0.5% alcohol which is far lower than regular beer.

You won’t also acquire the adverse effects of being drunk such as anxiety, hangovers, tiredness, or laziness.

Yes, most non-alcoholic beer is natural. Usually, these drinks are made using the standard four ingredients that brewers have used for many years, such as yeast, water, malt, and hops.

However, you should watch out for non-alcoholic beers that contain additives or artificial sweeteners.

It Helps You Get Involved/Fit In

With non-alcoholic beer, you don’t have to feel out of place at a party or gatherings anymore. It is mainly that in such events, not having a drink is not normal.

Choose from a range of non-alcoholic beers that suit your taste the most. These drinks are not dull and keep you company at parties. They look like the real thing too!

Non-alcoholic beers offer a list of health benefits. Aside from its low-calorie and alcohol content, it also reduces your likelihood of having heart disease. Also, it is an excellent way to rehydrate the body. It alleviates anxiety and stress and promotes better sleep.

These beverages also have vitamins and minerals such as folic acid, potassium, zinc, and iron.

In summary, non-alcoholic beer is not ideal for kids’ consumption. It is best to keep them out of your kids’ reach as these beverages contain 0.05% of alcohol.

Also, non-alcoholic beer still tastes like beer. Your child might become used to its taste at a young age, leading to alcohol dependence in later years.