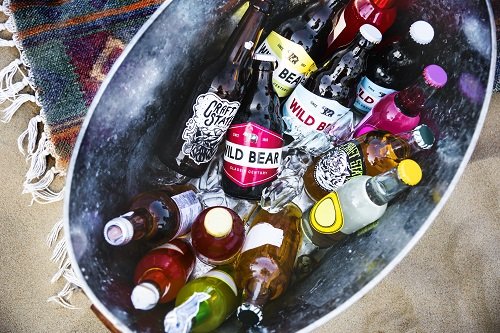 How Many Beers Does It Take to Get Drunk?

Many people don’t always know how many drinks they can have before they get drunk.

They’re trying to determine the number of drinks that one should drink so as not to get a hangover the next day.

Drinkers should also master the art of drinking responsibly.

How many beers does it take to get drunk? The answer is based on many factors, such as body type, alcohol content, and blood concentration. Some people feel drunk with just one sip of beer, and some never really get drunk.

In this article, the focus is on beer and the underlying factors affecting how much one can drink.

There are stages of being drunk, which I will also discuss later.

Most people believe that one has to drink too much to get to the point of being drunk.

But that is not the case at all. People’s bodies are different; hence, they have different levels of alcohol tolerance.

Drunkenness is an experience of subjectivity.

Two people who consume the same type of beer in the same quantities will have very opposite reactions.

How quickly your mind feels intoxication will depend on your body type.

The more you weigh, the more beers you need to drink to get drunk.

An individual who weighs 100 pounds (45 kg) may become intoxicated after 2 or 3 drinks.

However, a heavier person will hardly experience the first symptoms of drunkenness after 3 drinks.

Yet, impaired judgment starts at 0.02 BAC (blood alcohol concentration). So, one beer is enough to give up driving home.

The little-known truth is that your height impacts how easily you get drunk.

Big people have a longer circulatory system than small ones.

Science has verified that the average woman needs less beer than the average male to feel drunk.

The explanation is that women have more weight and less water in their bodies.

Your alcohol tolerance declines as you age. Seasoned drinkers will drink faster than anyone who tastes beer for the first time—the reduction in muscle mass in the elderly causes more rapid consumption.

How much alcohol you can drink before you get drunk depends a lot on the kind of beer you intake.

Commonly, craft drinks have a higher value of ABV (alcohol by volume).

Light beers tend to have a smaller concentration of alcohol than dark ales.

This means that you have to drink more alcohol to get drunk if you want a less effective form of beer.

The flavor, formula, and consistency also vary in terms of ABS.

Your body can respond unevenly to 2 dark beers from separate manufacturers. Plus, they have different calorie counts.

Your drink size is also significant. You can drink 3 drinks, for example, so it’s not the same as if you’re using a can, funnel, or glass bottle.

The greater the thickness of the packaging, the quicker you get drunk.

It also depends on whether you’re drinking a few drinks in an hour or consuming them all night long.

While several brands sell non-alcoholic beer, it is nearly impossible to make this drink without the smallest volume of alcohol.

Brew marketed as alcohol-free has less than 0.05% of ABV.

There is no risk of getting drunk on non-alcoholic or low-alcoholic beer when the body consumes alcohol quicker than you can drink it.

Non-alcoholic beer produces the same chances of getting drunk as eating a few pieces of rum cake.

Your body can easily handle that amount of alcohol without any consequences.

Oddly, you might get drunk on non-alcoholic beer if you find that there’s alcohol in it.

It’s a placebo effect that operates in the opposite direction.

The signs of drunkenness are weaker when you’re convinced that you’re drinking non-alcoholic beer.

Beer also has an alcohol unit value besides the ABV values. This statistic indicates the pure alcohol content of a single cocktail.

One unit has about 0.3 ounces of pure alcohol, which the average person’s metabolism can absorb in an hour.

If you drink 120 ounces of beer containing 4% alcohol, you consume 1.4 units of alcohol.

If you don’t give the body enough time to absorb the alcohol, dehydration will result.

Bear in mind that this is going to be 1.8 units per 5% beer! How fast you get drunk depends on how good the beer is and how easily you drink it.

Drinking on an empty stomach ensures that the body absorbs alcohol faster.

Lack of sleep, physical inactivity, and a high amount of body fat decrease your alcohol tolerance.

Also, hydration of the body is essential. That’s why a lot of people drink water along with their beer.

Your liver experiences dehydration when you are drinking beer. When your liver gets to this point, intoxication will occur faster.

Alcohol goes from the liver to the small intestine. After a meal, it will pass more slowly due to digestion.

On the other hand, if you miss a meal, alcohol will quickly penetrate the bloodstream and go directly to the liver and brain.

At 0.01-0.05 BAC, the person is unlikely to be drunk, although certain examinations can diagnose impairment.

Depending on the individual, judgment and response speed can be marginally affected.

In general, one drink can result in a BAC within this spectrum for both males and females.

There is also the exception of women weighing less than 100 pounds.

The second level of alcohol overdose, referred to as euphoria, is between 0.03 and 0.12 BAC.

This can equate to approximately 4 drinks for a woman or 2-5 for a male, depending on the size of the drink.

At this point, the person may feel more assured, maybe more talkative and animated, and somewhat euphoric. Inhibitions are now beginning to decrease.

Most people refer to this stage as “tipsy.” Alertness no longer exists during this stage.

The person starts to have difficulty interpreting information. One cannot identify danger easily.

Detrimental effects of alcohol can be appealing to some drinkers, but not to everyone.

Diminished judgment, memory, and coordination start to emerge in this stage.

The motor reactions of a human can be slightly more sluggish than those of a person with a lower BAC.

A BAC between 0.09 and 0.25 lands a person in the third stage of alcohol intoxication: enthusiasm.

They can begin to develop emotional instability, a lack of critical judgment, and a delay in response time. They may also experience:

A person with a BAC of 0.18 to 0.30 is at the stage of uncertainty, marked by mental upheaval and disorientation.

Coordination is seriously affected to the point that the person may not be able to stand up.

They may stagger while walking and may be extremely dizzy.

A person could have an increased pain tolerance, which means that they may be hurt and not experience the symptoms until later.

Those who are in this stage of alcohol intoxication are more likely to miss things that happen to or about them.

Blacking out without necessarily passing out will happen at this stage.

Someone at this point is highly drunk and in risky environments. They are at a high risk of alcohol overdose and death.

The person is likely to have lost a large amount of muscle activity, may not react to stimuli, may respond quite slowly, and may be:

Someone at this point needs immediate attention. Threats include hypothermia, arrhythmias, and seizures.

Individuals left to sleep may end up suffering from slower breathing or respiratory arrest or may choke on their vomit.

Circulation and respiratory processes are struggling in this stage. The response of the reflexes is greatly diminished as well.

As a result, body temperature decreases. The person who has entered this stage of alcohol poisoning is at risk of death.

At a BAC of over 0.45, many are unable to keep their essential life functions.

During this last stage, there is a big risk of respiratory arrest and death. Note that death is also likely at lower BACs.

The number of beers required to get drunk depends on the beer’s characteristics and the person’s body type.

Some beverages are far stronger than others, and 1 or 2 homemade beers will lead to intoxication.

Heavy alcohol consumption is potentially serious and can lead to injuries and death.