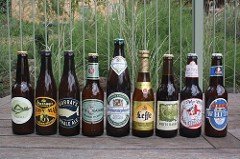 Types of Beer and Examples EVEN Beers You Don’t Know! Getting to taste different types of beers is an awesome, one-of-a-kind experience!

The beer industry has taken a whole new angle in the recent past thanks to technological advancements.

Technological improvements have ensured that after different types of beer are produced, consumers can get their beers on time while they are still fresh.

One factor that has remained dominant for years is the fact that beer is the same everywhere, but the difference in the types of beers available in the market is because of the kind of yeast used during the fermentation process.

Anytime you pop into any bar, you will find your favorite type of beer getting served. Otherwise, if you lack what you love best, you will have to leave the bar.

The best way to know the best type of beer, especially for beginners, is by getting to know the different styles of beer taste and being able to identify them by their visible look.

Usually, the types of beer you find in a brewer start as either a lager or ale.

Meanwhile, other types of beers evolve from these two major types.

In other words, the significant difference in beers is in their different styles of taste.

We shall majorly focus on the different types of beers available for you to choose and the distinguishing factors among them.

How Beers Are Fermented

Generally, beers are fermented in three common fermentation processes which are namely:

What is Top Fermentation?

Top fermentation in beer happens when yeast is used during the production of ale.

Yeast fermentation occurs all over the beer and finally settles on the uppermost part of the liquid. This process takes place when the temperatures are relatively warmer compared to the temperatures used during the production of lager.

The resulting top-fermenting styles of beer associated with the top fermentation process includes:

What is the Bottom Fermentation?

After the whole fermentation process gets done, the yeast settles at the bottom part of the resulting liquid vessel.

Generally, the resulting liquid has a lower tolerance for alcohol.  Below is some example of the bottom-fermenting styles of beer:

What is Spontaneous Fermentation

The spontaneous fermentation process is mainly used during the production of the sours and Lambic beers. It involves exposing beer in an intense environment full of wild bacteria and yeast.

The leading country of origin where the spontaneous fermentation process got used for the first time to produce beer was Belgium.

Due to the advancement of technology, other countries have invented new ways of producing sour beers without using the spontaneous fermentation method.

Some of the beers that result from this process include:

Some well-known delicious beer you can get include:

One of the excellent factors about ales is that they come in many varieties, ranging from the malt aromas to fruity-flavored beers.

One of the distinguishing characteristics between ales and lagers is that ales possess a darker color than the lagers most probably because of undergoing through a fermentation process with warmer temperatures.

Having undergone through the top fermentation process gives this type of beer a slightly fruity, acidic taste.

The different varieties of ale beer include the Pale Ales, Nut Browns as well as Abbey Ales.

There is a popularity of ales beer especially in Canada because they cover about 30% of the Canadian beer consumption industry.

When comparing lagers and ales, lagers are more carbonated which makes them possess a unique, effervescent quality loved by many people.

Because of their many years of existence, lagers have for many years acquired the title as the most popular beer in the world.

The taste of the lager ranges from sweet to bitter. They also possess a black to an almost pale color.

Pilsner beer brought a whole new look and taste in the beer industry. You can quickly identify the pilsner beer by just having a look at their crisp body and a relatively light color.

Pilsner is one of the best alcoholic drinks to take especially during the hot summer days.

Examples of pilsner beer include Harpoon P and Spaten Pils.

The main factor that distinguishes stout from other types of beer is its levels of thickness which has a relatively dark color.

Even so, the alcohol content found in this type of beer is low compared to beer brands like a pilsner.

Some stout beer examples include the Guinness and double chocolate stout.

Porter beer originated from the UK. They possess a dark color just like the stouts.

The dark color is due to the chocolate added during the production process.

Some of the examples of porter beer include the Founder’s Porters, People’s Porters, and Mayflower P.

Generally, the alcohol content levels in bocks are low compared to other types of beers.

There are different types of bock beer.

One of the types is the traditional Bock Beer which has a sweet taste and a dark copper color.

Another type is the Doppelbocks which has a darker color compared to the traditional bocks and also has a higher alcohol content level.

Weissbier beer is famous for their sweet taste, and are mostly brewed in the barbarian style.

The high sugar content in this type of beer is due to the malted wheat during the production process.

Weissbier falls under the white beers which contain relatively high levels of alcohol.

Some examples of the Weissbier the Blue Moon, Shock Top, Boulevard Unfiltered Wheat, and the Paulaner Hefe-weissbier Naturtrub.

Lambic beers are produced through the spontaneous fermentation process, and most people who brew the Lambic beer are the Belgians.

Because of undergoing the spontaneous fermentation process, Lambic beer possesses a slightly dry cider-like taste and an original punch taste.

Some examples of Lambic beer include Lindeman Framboise and Dried Fonteinen Schaerbeekse Kriek.

Malt liquor falls under the category of the lagers.

Malts have gained a lot of popularity mainly because of their sweet taste and their low alcohol content.

Many people who are not alcoholic addicts prefer to take malts. Some of the malt liquor examples include the Country Club, and Colt 45.

The production of the Kolsch beer takes place under strict brewing method regulations, explicitly focusing on the cold temperatures as well as the warm fermentation process.

Kolsch beer was first brewed in Germany which makes the German people appreciate this type of beer.

This type of beer possesses a slightly pale and clear hoppy color.

Some of the Kolsch beer examples include the Sunner Kolsch and Harpoon S beer.

The origin of the Japanese beer dates back in the 17th century. The first people to brew this type of beer learned the production skills from the Dutch traders.

Most of the Japanese beers are seasonal. Meaning, there are autumn beers and winter beers.

The primary characteristics that dominate in the Marzen beer are the copper color and the high alcohol content levels.

Marzen beer originated from the Bavarian area in Germany back in the 16th century.

The name Marzen beer comes from the month it was brewed. Marzen is German for “March”.

It stood out because of the secretive ingredients used during production which made the beer last for a very long time.

The specialty beers are a group of beers that are produced in recent years. Unfortunately, their characteristics don’t fit any of the categories mentioned above.

These types of beers are also produced using a variety of ingredients which include herbs, vegetables, fruits, honey, and different spices.

Some of the specialty beers are gluten-free while others trace their origin back from brands like wine and whiskey.

The Major Categories of Beer Flavors

Do you sometimes sit down and wonder what type of flavors make up your favorite beer?

Well, in this section I will take you through the significant beer flavors available in different kinds of beers.

These beer flavors include:

The crisp flavor ranges from straw to amber and also comes in a lighter, cleaner flavor.

Some of the crisp flavors include:

Delicate fruit. These beer styles possess a kind of natural fruit flavor like that of berries or green apples.

The major types of beers that have the delicate fruit flavor include the white ale and Kolsch beer.

Malt scented. The types of beer that possess the malt scented flavor tend to have a biscuity taste and full bready malt flavor which have traces of crisp dispositions.

An example of a malt scented flavored beer includes the Pale Lager.

Pilsner contains this type of flavor.

Any beer that contains the malt flavor has a unique sweet taste as well as a fragrance smell. Some of the ingredients incorporated in the malt flavors include nuts, caramel, fruits, and the sweet-tasting toffee.

Beers that contain the malt flavor have low alcohol content levels, and they also range from copper color to dark brown colors.

Some of the types of beer with the malt flavor include the Doppelbock, Dark Lager as well as the English M.

You will immediately notice the types of beers with the hop flavor because they possess unique aromas.

The hop flavor gives the beer a slightly yellow to brown color. As for the alcohol content, it is usually low because of the presence of malt flavors.

Some hop-flavored beers include the Belgian IPA, English Pale Ale as well as the American Barley Wine.

When you put highly roasted malt grains such as coffee or cocoa beans in a beer, you have yourself a roast flavored beer.

These ingredients give this type of beer a dark, dominating color.

Other than their color, they can contain low to high volumes of alcohol which makes a majority of alcohol brewers to love this beer flavor.

Some of the beers which have that roast flavor include Sweet Stout and the Imperial Porter.

Being able to identify your beer can be a cool party trick among friends.

A Beer consumption date back about 8000 years ago which is one way legalizes the intake of beer.

Having more knowledge about beer is awesome because you will know why a specific type of beer possesses a particular taste and physical appearance.

Beer intake is good but always watch out your intake as too much consumption will do more harm than good in your body.