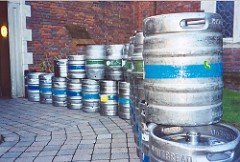 Beer existed from the time people believed that the earth was flat up to present. Whether you enjoy taking ale beers, or lagers, you are among the people who enjoy taking beer which comes in different types of kegs.

Since the beginning of beer history, it has not seen a lot of revolutionary changes. However, the only significant difference felt is in how the beer gets served and distributed.

Ingredients used for making beer also remained the same. Additionally, the process of brewing is also the same since the discovery of beer a long time ago.

In this article, we shall focus on keg production, then focusing our interest in the following subtopics:

Since the 20th century when technology significantly advanced in the world of the beer industry, the canning and bottling of beer took a whole new turn and became a big business.

The new canning and bottling ways made the transportation of beer easier despite long distances.

However, what many people do not know is that beer is a perishable product just like any perishable food in the market. This means that beer does not age well.

Canning and bottling of beer enable carbonation, which helps in the preservation of beer.

To those who toured around the brewing industry, I am sure you remember beer samples being distributed directly from a keg, not from a bottle or can.

This is because manufacturers want you to experience natural tasting beer.

Taking a bottled or canned beer and beer directly from a keg gives a different taste. You can only notice this when you taste the two at different intervals.

A keg offers a smooth and fresh taste of beer to consumers which makes keg brewing highly popular.

But generally, many people love beer brewing regardless of how they consume it.

For many years, people have wondered how much beer you can contain in different varieties of kegs.

Well, worry no more. I will answer the question for you.

It is quite understandable why many people ask this question. They want to get the real value of a keg. Also, they want to know how much a keg can provide for large groups of people.

So how much beer is in a keg? We must look at the different sizes of a keg and what each size contains.

The different keg sizes include:

A mini-keg also goes by the name of a bubba keg. You usually serve it in a mini kegerator.

Bubba kegs, in most cases, are served for only a few individuals.

It holds up to a maximum of 14 twelve-ounce pours. The kegerator is easy for transportation purposes.

Most people who take this type of keg brew it at the comfort of their homes.

At maximum, this size of a keg holds up to 53 twelve ounce pours. In the past, these sizes of kegs are used in the soda industry.

After the introduction of this type of kegs, many people who purchased this type of keg were microbreweries and other small business owners who had limited space but wanted to brew more beer.

The uniqueness of the sixth barrel keg is in the packaging of the beer because it comes in a small footprint.

Because of the unique nature of the small footprint, the sixth barrel keg gets served in dual tap kegerators.

The maximum beer it holds is up to 56 twelve ounce pours.

Another name for this size of the keg is pony keg, and most of the time it is brewed in small and medium-sized occasions.

Just like the half barrel sized keg, the quarter barrel keg also comes in dual tap kegerators, but the footprints are easy to access when they are at half the weight of the full keg.

At maximum, the quarter barrel keg holds up to 82 twelve ounce pours.

The slim quarter kegs also go by the name of big quarter kegs. They serve small to medium-sized parties.

The availability of small prints on them makes it convenient to use in dual tap kegerators. However, the only difference is the slim barrel is taller than the quarter barrel.

Another name for this type of keg is a full-sized keg.

These types of kegs are widely known and distributed which makes them a popular type of keg.

The advantage of a half-barrel is that it can serve a large group of people, making it convenient for large occasions.

Many business persons with large space stock this full-sized keg on a large scale to serve in their large restaurants as well as big events.

At maximum, the full-sized keg can hold up to 165 twelve ounce pours.

The cost of keg varies per size due to the following factors:

A glass of keg does not cost much money. However, renting the whole keg barrel can get a bit expensive depending on the size of the keg barrel you will buy.

After purchasing a keg barrel, you need to know how you should set up a kegerator to make it easy to serve the beer.

Setting up a kegerator can get quite challenging if you don’t know what you are doing.

But worry not. I will take you through step by step process of how to set up a kegerator as well as the tools you need to commence the setup.

Beer is one of the beverages most loved by people because of their delicious taste. For many years, keg beer has gained popularity because of its smooth taste and its freshness especially when served from a kegerator.

If you haven’t tasted beer yet, and you want to try out, I would recommend you taste beer directly from the kegerator rather than purchasing canned or bottled ones.