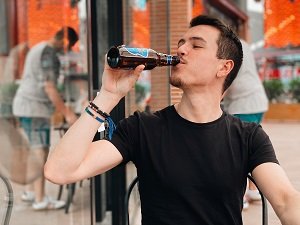 Beer is undeniably among the most popular drinks globally, with so many variants unique to different countries.

Because of this, breweries and companies alike endeavor the challenging feat of wooing all sorts of people to drink their beverages. This pursuit eventually gave birth to zero alcohol beer, perfect for people who are not fans of alcohol.

Is zero alcohol beer healthy? Aside from being a better alternative for regular beer overall, zero alcohol beer benefits from rehydrating the body, aiding in post-workout recovery, promoting better sleep, and even reducing anxiety.

This article discusses zero alcohol beer, its different types, and its benefits to the average beer consumer.

What Is Zero Alcohol Beer?

Zero alcohol beer is a beer that is brewed with little to no alcohol content. This brewing technique is done so that the finished product can replicate the taste of beer.

This is while eliminating or reducing the inebriating effects of regular beer. Most zero alcohol beers are lagers but may also come in the form of low alcohol ales. Zero alcohol beer also has different types: light beer, low point beer, near beer, and small beer.

Beers with a reduced caloric content compared to regular beers are often called light beers. These beers also typically have reduced alcoholic content, depending on the brew the company sells.

The “light” and “lite” iterations of the term can be used interchangeably. The most common manufacturing method of brewing light beers is by reducing the carbohydrate and alcoholic content of the beer. This is because these are the two most prominent factors in the caloric content of the beer.

Light beers are primarily marketed towards people who are trying to keep track of their caloric intake. Be that as it may, these beers are often criticized for not having a flavorful profile since they are “watered down.”

Because of this perception, many advertisements about light beers address the retention of flavor in the beverage.

Low-point beer is also commonly known as “three-two beer” or the “3.2 brews” since this type of low alcohol beer contains 3.2% alcohol by weight, equivalent to 4% ABV.

Low-point beer is a term unique to the United States, albeit some states prohibit and regulate the sale of beer. This type of brew is also available in countries that tax or regulate beer according to its alcohol content, such as Sweden and Finland.

“Near beer” was originally a term used to refer to malt beverages that contain little to no alcohol with anything less than 0.5% ABV.

These beers were extensively marketed during the Prohibition in the United States because near-beer could not be legally labeled as “beer” and was officially classified as a “cereal beverage” due to its low alcohol content. Additionally, it was the populace that gave this beverage its name.

Near beer may not have been illegal, but an illegal practice was adding alcohol to the beverage. It would then create spiked beer or needle beer because a needle or syringe would be commonly used to add alcohol through the cork of the keg or bottle.

The term “near beer” was actually revived into the non-alcoholic referral today ever since the late 2000s. In the early 2010s, breweries also started selling more non-alcoholic beverages to counter the declining alcohol consumption.

Small beer, also known as small ale, is an ale that has very little or no alcohol content. This beer was often drunk unfiltered and porridge-like and popular in medieval Europe and colonial North America.

This beverage was also commonly produced in households for the family’s consumption during special occasions.

Anyone pregnant or under medication should limit or avoid alcoholic beverages in general. Zero alcohol beverages are helpful in this regard. The same goes if you’re trying to switch to more fitness and health-oriented lifestyle.

More often than not, consumers are wary of the “morning-after” when it comes to spending some time with their favorite drinks. Zero alcohol drinks can give you all the celebration without the hangovers.

You can drink the night away and still be up early in the morning. Another perk of drinking zero alcohol is the peer pressure off your shoulders regarding parties and social events. They’re not going to tell you “just one more drink” if your hands are occupied.

Non-Alcoholic Beer Is Lower In Calories

Have you noticed that you never see nutritional information regarding regular beer, wine, or liquor? They will never show you the ABV, so there’s no way to find their sugar and calorie content. If you are trying to keep up with a healthy lifestyle, this may be quite the red flag for you.

An average beer has a caloric count of 200 per pint. Remember that this is your average beer. Beers with a higher ABV can have a much higher calorie count. Even a 12oz bottle of light beer can already have as much as 150 calories.

All of this is to say that if you’re drinking your average beer, you’re intaking that much empty calories back into your body which is not what you want to do if you’re on a diet.

While you’re at any given pub or restaurant, enjoying your meal with a couple of pints may sound harmless, and it might just be. If you drove to where you are, downing that much may not be such a sound idea.

How Can Zero Alcohol Beer Improve Your Health

Hydrates Instead Of Dehydrates

With the usual exception of alcohol and coffee or any drinks with caffeine, most fluids are going to hydrate your body. The same is true in terms of drinking regular beer and zero alcohol beer.

Zero alcohol beers do not work as diuretics and will not give you a hangover because of dehydration from the night before.

Some studies have shown that zero alcohol beer can be a viable substitute as a recovery drink for athletes and regular consumers alike.

These recovery benefits primarily come from the presence of phenols, which are compounds derived from plant life. These phenols can help reduce inflammation and strengthen the immune system of humans in general.

Remember this the next time you cross a finish line, complete a hike or even get through a tough workout session. Celebrating with a zero alcohol beer is a much healthier alternative than its regular counterpart since it gives you a boost in recovering your energy.

People, at least adults, have always consumed alcohol to help with their sleep cycle. Choosing to drink a zero alcohol beer serves consumers better in this regard as well.

According to research conducted by several nurses, participants could fall asleep faster and more profoundly when they consumed zero alcohol beer before going to bed compared to not drinking anything.

The same study noted that drinking zero alcohol beer reduced the participants’ anxiety, something its regular counterpart cannot do.

Zero alcohol beer is a lot healthier compared to regular brews but always practice precaution and drink moderately. If your goal is cutting your consumption of alcohol due to health reasons, keep in mind that zero alcohol beers still lets you have fun without worrying about anything.

Beer tastes better when you know it’s doing something great for your body, after all. In addition to that, it also helps your psychological capacity as you’re having fun while drinking.