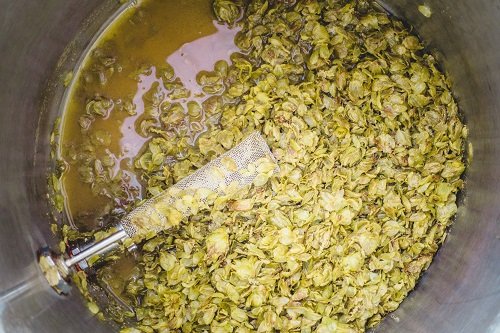 How To Brew Beer At Home Without A Kit?

It depends on how you prepare it, and you can always do it even without those fancy kits you see in many beer breweries.

How to brew beer at home without a kit? First, make your starter wort and heat the water and malt. Then prepare the mash, add in the grain, and then you will have the first runnings. After that, you can proceed with boiling and then the bottling process.

In this article, you will find information on how to beer your very own beer in the comfort of your home. Y

You can even do this with limited equipment you can find in your house, as all you need is the right knowledge and preparation for it.

Guide To Making Beer At Home

The great news for many beer lovers is that you don’t have to spend a lot of money buying every cans and bottle of beer you like.

You can actually make your own with just a little effort and a fraction of the cost of most commercialized beer.

This method uses one fermenting process, so only one brewing container is actually needed.

All you have to prepare is a large, reusable 2-liter plastic pop bottle to be your beer bottle.

It can also save the work of washing, capping 60 to 70 bottles of regular-size bottles, and the bottling process.

In addition to that, with every batch, you are saving the environment the impact of making 60-70 aluminum cans or even glass bottles.

Yeast is considered to be the essential part of making beer as these fungi feast on sugars, making alcohol as they go.

The presence of more yeast cells in the mix, the better job they will be able to make alcohol.

In this first step of beer making, the yeast cells get a head start as they divide and populate on dry malt extract.

The ingredients you need are 2 quarts of water, 6 ounces of dry malt extract, 1 package of instant starter wort.

You need to heat the water and malt first until it boils in 10 minutes and then cool it up to 60 degrees F.

You can do this by checking in with a thermometer or just following the rule of thumb is about the room temperature.

Then you can proceed with sanitizing the gallon container with a no-rinse sterilizer following the manufacturer’s instruction.

Pitch in the yeast by tossing in around 33 billion yeast cells, and you can check this in your starter into the 60-degree wort.

You need to cover the starter wort, set it aside, and ensure that the container is not airtight.

2. Heat The Water And Malt

The second step is already tackled in the first step as it makes the starter wort.

But heating water and malt for the starter work is crucial, so it should not be looked at.

After heating, you need to bottle it in a clean container and then add the yeast to the wort, then proceed to seal the bottle.

It would help if you didn’t seal it air-tight and using foil as the seal is actually the recommended.

Making a mash is not actually necessary, and it can be optional because you can brew a delicious lager or an ale with only the pre-packed malt extract.

But if you want to go with an all-grain beer, you need to extract the sugars from the grain properly.

You need to have 11 pounds of grain and 11 quarts of water for this to work.

You can use grains that include 5 pounds of Belgian pilsner malt, 1.0 pound of flaked oats, 4.5 pounds of German wheat malt, and 0.5 pounds of caramel Pils malt.

You need to take the mash with all the ingredients above in a pot and then bring it up to 150 degrees F.

Test the mash because this way, the point of mashing is to turn all the starches available in the grain into sugar and extreme them into a sweet liquor.

After an hour, make sure that this process has taken place, and then take out the spoonful water and grain mix and add an iodine drop.

The murky brown iodine will turn black because of the starch’s presence; if this happens, you need to do more mashing. If there is enough sugar., the color will remain the same.

The next step is to add all the 11 pounds of grain to the mash and then stir them properly. You might want to prep a strainer.

You can use rice hulls on the bottom for your very own DIY strainer. This ensures that the grains didn’t gum in the works, then you are ready for straining and sparging.

Once you are ready, you can pour the mash into the lauter tun. It is a big strainer that is used for separating the extracted wort.

If you are looking for some budget-friendly lauter tun, you can try to drill ⅛-inch holes into your 5-gallon bucket and place this strainer on top of another 5-gallon bucket.

Next is to capture the runoff liquid in your brew pot, and this liquor is called your first runnings.

Once all the liquors have a runoff, you can heat the rest of the water, which is ½ gallon per pound of grain at 180 degrees F, and this is over the grain in the lauter tun.

You need 1 ounce of 4.8% alpha-acid Styrian Goldings hops, a half teaspoon of ginger, and 1 cinnamon stick in the boiling process.

This is a perfect time to raise the wort into a vigorous boil as the boiling procedure will kill offending bacteria or wild yeast.

This process will release DMS, a chemical byproduct of heating that will give akin to sweet corn.

You need to watch carefully during this process because this is where the wort is prone to boiling over. In the end, you will get a sticky mess that makes for a hard cleanup.

As soon as you can reach the boiling point, you need to add the hops to the wort and then continue to boil for another hour.

Hops added at this time will give the beer its bitterness because the alpha acids are being extracted.

If you added Belgian wits in the mix, they are not terribly bitter, so it is called for just one ounce of 4.8% of alpha-acid Styrian Golding hops.

Sometimes, in most beer recipes, they add another hops 2 to 5 minutes before the boil gives it more flavor and aroma.

If you forgo these additions, the wheat beer becomes lighter on the hop flavor, but it needs the addition of ½ teaspoon of ginner and a stick of cinnamon.

Adding a cinnamon stick will amplify and add a special touch of flavor, and it should be done in the last 5 minutes of boiling.

7. Cool The Beer And Pitch The Yeast

After boiling your wort, it should be cooled as soon as possible since the cooling period is the most crucial.

This is when the beer is most vulnerable to different microorganisms that can be present in the air.

You can achieve cooling using a wort chiller or by dripping the brew pot into a sink full of ice water. You should also not add ice directly to the beer, as it is not the right way.

This is because you must cool the beer for 68 degrees F, and it should be strained, transferred to a sanitized carboy. This is where the beer will stay in its first few days of fermentation.

It would help if you affixed a blowoff tube to the top of your carboy, and you should place the other end of it under a couple of inches of water.

This way, you will be sealing it from the outside environment where the carbon dioxide will escape.

During the first 8 to 26 hours of the process, you will be able to see a vigorous fermentation anywhere.

After seven days, all visible fermentation will be gone, and the wort should be transferred via a siphon in another clean container.

The last step is the bottling process, and you need to take at least ¾ cups of corn sugar then boil it for 15 minutes in a pint of water.

Once the sugar water is cooled enough, you can add it to the bottom of the bottling bucket and then add the beer to this bucket.

The sugar water will give the yeast something to eat while inside the sealed bottle for its final stage of the fermentation process.

This is where the beer will get its characteristic bubbles, and after 2 weeks, the beer will be able to carbonate fully and be ready to drink.

Once you can practice and make many batches of your own homemade beer, it is now time to experiment and add different enhancements to the mix.

It would help if you were careful when adding your personal touch, and caution is always a good idea.

It would help if you tried these enhancements in small amounts to be a waste in the end.

You can try putting the whole dried hops or some hop flakes into the cheesecloth bad and add to the cooking malt.

The more hops you got, the better, as this will give a distinctive hop flavor to the beer, and it will also help preserve your final product.

Technically speaking, there are beers made without hops, and they are commonly known as ale.

Molasses is another way to add to your beer enhancements experiment. You can add a cup or two of molasses to the malt while it is still in the cooking process.

You should cut back a bit on the sugar, though, as it can impart a darker and a more full-bodied taste to your beer.

Blackstrap molasses is darker and considered to be richer, while on the other hand, fancy molasses are known to be lighter.

Licorice can also be used as beer enhancement. All you have to do is throw in a few sticks into the malt while still cooking.

Leave it for about 5-10 minutes, then remove the unmelted pieces before pouring your brew into the carboy.

Herb tea can also be used as an enhancement, and you can add 3 to 4 teabags of your preferred tea.

It can be a Bengal spice tea or even an apple cinnamon spice tea and add them while cooking the malt. Remove them after 10 minutes, and this will give a bit of a spice flavor to the taste of your beer.

Many beer brewers prefer to use a combination of herbs to balance the malt’s sweetness if you are not using hops.

You can use common herbs such as sweet gale, yarrow, Labrador tea, juniper, nettle, aniseed, caraway, and some mugwort.

You can add them during cooking and fermentation to get more richness and flavor.

In conclusion, brewing your own beer at home is not a complicated task as you need to get all the ingredients and household tools to make your very own.

The key to brewing your own beer is to do your research and follow all the instructions in the recipe you are looking at.

Adding enhancement is also a good way to explore different flavors, so you have many options to drink.